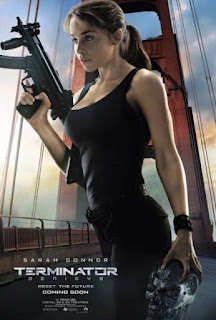 The very recent Terminator Genisys is something I never quite wanted to watch. But since my wife became a recent fan of the series, she wanted to see this one too. The only reason (besides my love for the series) I wanted to see it was because of the leading-actress Emilia Clarke. Better known for being the absolutely gorgeous silver-blonde Queen Daenerys Targaryen on Game of Thrones, she's now Sarah Connor in Emilia's Clarke natural brunette hair color. I heard the movie was pretty atrocious and I had very little doubt about it. But curiosity eventually got the cat and I knew I'd eventually watch it anyway. Since my expectations were extremely low, was I awfully surprised or did critics get this one right? 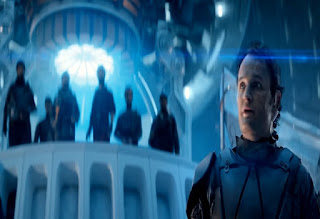 The movie takes place in an ultimate end of all the confusing time-lines that we have seen before in the previous films. Heroes of the future John Connor and Kyle Reese help humanity rise up and overthrow their robotic oppressors. John gets to the point where he must send his father Kyle Reese (who still doesn't know about it) back in time to save his mother Sarah Connor from a robotic monster. Before Kyle is whisked off to 1984 he sees John Connor attacked by a unknown menace a few seconds after it was too late. He arrives in the 1980's much like how we remember. Except he's quickly met by a T-1000 which is a far-superior robot than the T-800 one he was suppose to stop. He's saved at the last minute by Sarah Connor, whom he thought would be too shy, too weak, and utterly unable to understand what was really going on. 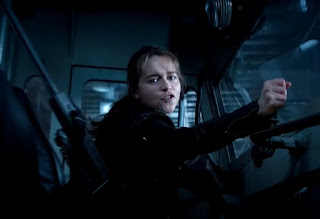 It turns out that Sarah Connor's parents died well before they originally did in this new time. So in the meantime she was raised by a T-800 sent back in time to protect her like two had been sent to protect her future-son John. The T-800 has been like a father to her so her "Pops" has been her loyal friend since her childhood. The relationship has molded Sarah into a far stronger person than her original self ever was. The new Sarah is fully aware of what her future-son John will become, and that she will have to fall in love with Kyle Reese to father him. When all seems well and reunited, things take a far turn for the absolute worst. Sarah Connor is far from impressed with Kyle Reese but they'll have to work together (with Pops help) if the ever want to save humanity and their very own lives for that matter from the machines who will one day crush the citizens of Earth to the point of oblivion. 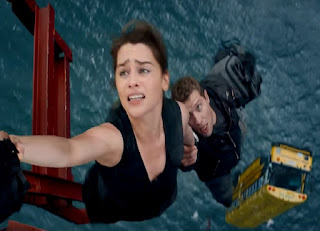 Genisys was actually a bit better than I had expected but then again I had thought I'd see the bottom of the barrel. Arnold Schwarzenegger apparently only did the movie because he thought the story was good enough. Besides the confusing time-travel stuff, I can actually see that being fair. What's wrong with the movie is a lot of things. The acting is sub-par, and it often feels like a cheesy Sci-Fi movie made for television. I hear Emilia Clarke doesn't want to return for the planned sequel, and I don't blame her as often times actors and actresses are only as good as their directors and writers. I didn't like Jason Clarke as John Connor, and I thought Jai Courtney as Kyle Reese was a giant miscast. The original movie depiction of Kyle Reese was very human and complex. Jai Courtney seems like he had show up at the wrong place at an audition for a one-dimensional soap opera character and they decided while he was there he might as well be Kyle Reese. The movie does some things right, but it's certainly the worst in the series.

Wow I never realized that was the same actress. Much cuter in GOT.
Lisa

You know, I love all the Terminator movies, and really was gonna see this. I must'v started it about a kajillion times on Netflix but never got past the first five minutes:( I really just wanna see it because of Emilia Clarke, but I do think Jai was really wrong for that part.

i wanna watch this movie, too. because of the actress. :D

Emilia Clarke as Sarah Connor was actually my favorite character in this movie! I really didn't expect they'd make a second part to this one though.

I tried to watch this and it was a big NO!! I hate it. T1 and T2 are fantastic movies way ahead of their time.

My husband and I saw this recently and I feel the same way as you do. Not the best film in the series!