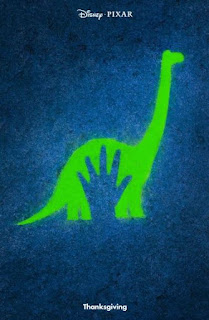 I remember hearing about The Good Dinosaur sometime last year or maybe in 2014. Anything by Pixar always gets my attention. But I waited to see it when it was in theaters. I was optimistic but not that excited as only really go to the movie for stuff that I really really want to see. And ones that my wife Daisy wants to see as well. It did well with critics but not as fanastic as they usually do. Pixar has dropped the ball a few times, most especially with the Cars movies. It also had the worst reception at the box office than any other Pixar film. Now the question is if it really is about as as disspaotinting as the Cars movies or does it stack up to the Pixar greats like Toy Story and Finding Nemo? 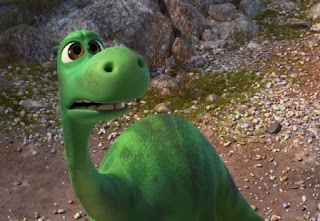 The main protagonist of the story is Arlo. The young dinosaur is an Apatosaurus who lives on alternate reality of Earth where the giant asteroid did not wipe away the dinosaurs. Millions of years after the missed asteroid, his family runs a farm where they raise corn. His Poppa Henry is concerned that Arlo is not quite ready for farm-life along with his mother Momma Ida. His sister Libby and his brother Buck seem to be doing fine, but Arlo just struggles and causes more grief than bliss when it comes to chores. His father tells him that a critter has been getting into the corn silo and that he must catch the creature and exterminate it. The "critter" is a little human who is the first person that Arlo has ever seen. Arlo has a chance to do what his father wanted but doesn't have the courage to do so. Poppa Henry soon learns and gets furious and leads Arlo to the path where the "critter" ran off to to finish the task. On the way there, a flash flood occurs and Arlo is saved by his father at the last minute but his father does not. Arlo sees the little human soon afterwards and in a fury tries to get his revenge. They both end up in the river and get washed far down stream. 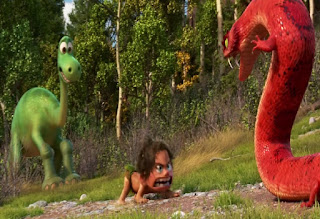 Far away from home, Arlo is scared and lonely. Despite his deserved hatred for the little human kid, Arlo eventually bonds to the little human and even names him Spot when he realizes he needs a name. Spot decides to join the dinosaur Arlo on his quest back to return home to Momma Ida and his siblings. But there are many things to worry about for both of them. There are many wild vicious animals in the wilderness that Arlo is too weak and too afraid to counter against. And even worse are a bunch of intelligent dinosaurs who are far from benevolent and more mostly looking to fill their stomachs. Then there's mother nature herself in her bitter sympathy. There's tough terrain to travel-by, rain to seek shelter from, lack of food around, and storms to avoid. Will the two misfits survive their grand journey or will they face horrible extinction? 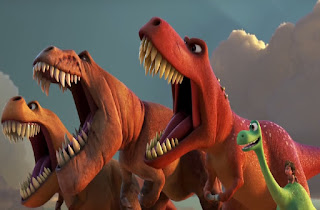 Overall The Good Dinosaur was better than I had expected. Many called this one the most "generic" Pixar movie ever (maybe none of them have seen Cars) but I had a lot to relate to in the movie. I lost my father when I was young, I was the youngest (and most pathetic) sibling, I had troubles with courage, and I always appreciated having that one friend in the world. So I guess I liked the film more than others because I think Arlo reminds me so much of myself when I was younger. But honestly even I really liked The Good Dinosaur it's certainly not the greatest Pixar film, I'd say something like lower middle maybe. I'd certainly rather see a sequel to this over the upcoming Pixar movie Cars 3.

i actually really wanna watch this movie. really want. but somehow it did not happen lol.

We've been picking and choosing our movies carefully lately because of cost but this does look like a good one.

I have this one on Tivo. Waiting until we get back from vacation to watch it together as a family. Glad to hear your good rating of the film.