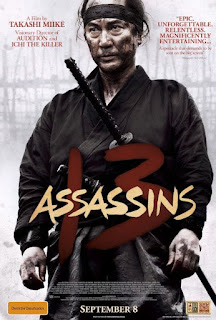 13 Assassins is something I was pondering about watching for at least a year or two. I had noticed it was a Japanese movie and all foreign movies can be a little hard to know if it's any good because they rarely (if ever) make a splash in America where everyone talks about it. I've always been fascinated by Japanese history and I love stories about samurai. 13 Assassins reminded me of the fan-favorite Seven Samurai (which inspired the American movie The Magnificent Seven) which I had seen quite a few years ago. Though it's not really a copy-cat, the plots are more like the difference between lemonade and tea rather than Coca-Cola and Pepsi. They're similar but there's an obvious difference and qualities between the two. Seven Samurai was one of the most critically-acclaimed films to ever emerge out of Japan, does 13 Assassins even hold a candle? 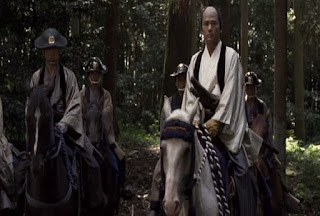 The plot is set in Japan during the 1840s when the land of the rising sun was mostly isolated from the outside world. During this period, most of the power in Japan was held to the Japanese shogun, not the Emperor.  The Shogun's half-brother Naritsugu Matsudaira is a very notable lord, and because he's the Shogun's brother he's practically untouchable. Unfortunately for those near him on his side of Japan, he was born a sadist and with his high-rank his evil spirals out of control. He crushes any sign of rebellion or insubordination. He also commits horrible things done to men, women, and even children of those who did nothing to him. While many are loyal to their vicious lord, there are whispers of taking him out of the picture even from those in his circle. But what kind of man will be able to stop him? 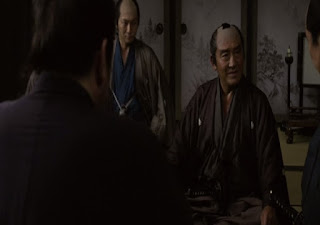 An aging samurai named Shinzaemon Shimada is tasked with the assassination of the Shogun's half-brother. He has lived a rather long life and for a samurai an honorable death is very important. While most would be scared to take on a task, he's more than excited to take it on. He gathers a team of 12 other samurais and ronins (a masterless samurai) to help them on his mission. They know he is traveling to a place in Japan, and hope to bring fury to him on his trip there. But with an army protecting him, will 13 warriors be enough? Or will the terrible lord be free to enjoy his life as a horrible ruler? 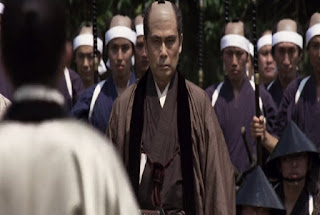 13 Assassins was a bit better than I expected. Naritsugu Matsudaira is one of the most evil villains I've ever seen in fiction, and he could rival King Joffrey Baratheon or Ramsay Bolton (from Game of Thrones) in sheer cruelty. I also liked most of the 13 samurai out to be his bane, but I thought the final battle got a little ridiculous. They use some clever stuff to make the odds more realistic but there are many moments where if this actually happened for real then there's no way things would have gone the way they went. Now if you can't stand movies that aren't in English, I don't know if I can convince you to try this one though.