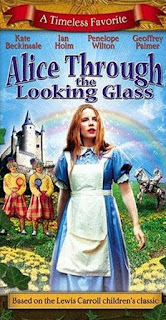 Alice in Wonderland is a tale most people at least know of. It's also been done more times than most people remember. When I heard of this movie, I thought it was based on Alice in Wonderland and forgot that this (by the title) is based on a sequel book. I was surprised I had never heard of it as it has the absolutely beautiful Kate Beckinsale, but this one was actually made just for TV. So I guess that does make a lot more sense. Disney made a new sequel to Alice in Wonderland that is loosely based on the novel and I heard someone say this TV film was far more true to the book (like almost identical) than the new movie could ever hope to be. 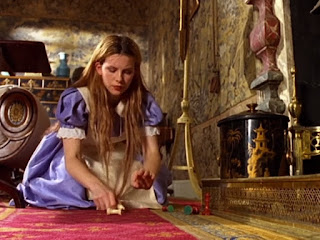 The story starts with a mother reading the Lewis Carroll story to her daughter at bed-time. She then looks at the mirror and imagines herself in the world as Alice herself. Then she's really no longer the mother but Alice. She finds herself in a room and sees talking chess pieces. She thinks it's all rather bizarre but helps in their troubles. Then she wanders into more "worlds" and situations all of which are sort of connected. She meets the Red Queen who offers Alice the chance to become a Queen herself.

This process has her (which is based on chess actually) moving across squares as a pawn. Except each square is a different scenario. She'll meet quite the odd bunch of weirdos on her way.  Such as the White Queen who might as well have a brain made of cotton. You also have the strange pair of brothers Tweedledum and Tweedledee. She'll also meet many others good and bad but regardless of their virtue none of them make much sense at all. 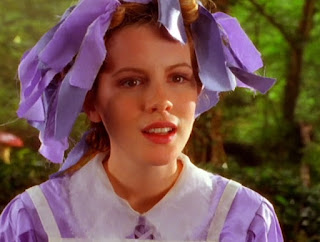 I actually had some high hopes for Alice Through the Looking Glass, but I hated this movie. It's such a bore, and if the book really is pretty much the same (which I can see that it is story-wise) then I have no idea why anybody likes it. Lewis Carroll was a man who should have grown up in the 1970's with such a creative imagination but all this story is nothing but mindless dribble. The only good thing about the film is that Kate Beckinsale sure is pretty to look at. I hear the new Disney movie of the same name was not a hit with critics, but I can't imagine it being any worse than this one as it's so dreadfully boring.

I haven't watched this one. Not my type of movie.

Oh, I have never seen this version - but won't aim to, as you didn't seem to like it!

I never seen this version!!
I read the bppk of course and I saw the Disney movie !!