Cloudy with a Chance of Meatballs (2009 Film) Review 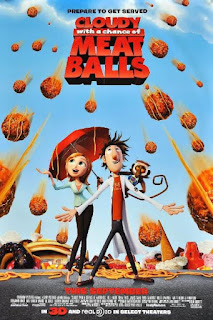 Cloudy with a Chance of Meatballs is a movie I remember coming out in 2009. But I wasn't interested at all in it nor in the sequel that followed a few years ago especially as I was rather clueless about the plot. I vaguely remember the book (though I don't think I read it) from which its loosely based and there wasn't any nostalgia from me for it. My wife Daisy heard of the movie and it was really her idea to see it. She was originally going to watch it alone, but I had enough interest in it now to see it with her. Sony Pictures Animation certainly doesn't have the same pedigree as Pixar or Dreamworks, so is Cloudy with a Chance of Meatballs worth of rivaling their greatest works? 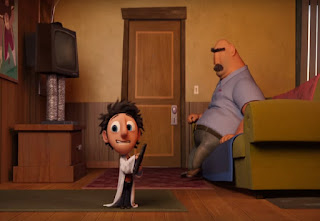 The story is about Flint Lockwood who wanted to be an inventor ever since he was a little kid. Except all of his inventions have been failures. Flint is nothing like his father Tim Lockwood who is techno-phobic and rather prefer fishing or talking about fishing. His mother passes away which leaves his father widowed when Flint grows into adulthood and struggles to fit in. They both live on a island where sardines are the main thing that churns the local economy. Flint gets the idea to make something that will make the town known for something other than smelly fish that very few like to have on their pizzas. 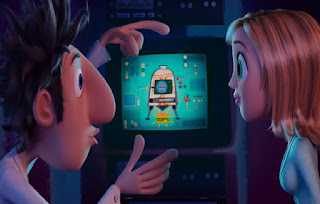 The invention is known as Flint Lockwood Diatonic Super Mutating Dynamic Food Replicator and everyone initially thinks it was just another stupid invention that doesn't work. However to Flint's shock, it works amazingly well and edible food rains down from the sky. This gets him close to Samatha Sparks, a cute intern-turned-weathergirl. The mayor of the island also takes a keen interest in Flint and hopes he will continue to use the machine to make food fall from the sky. The mayor hopes this will turn the island into a super-tourist spot, and it certainly has the attention of the whole world. But will big success there can be big failures. Flint's father Tim is the only one not excited about the raining food, and is the first to wonder if the machine will be good for the town in the long-term. 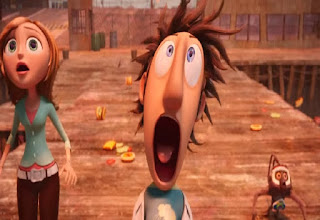 Cloudy with a Chance with Meatballs was about as I had expected except maybe a tiny bit better.. It's a decent animated movie with a simple but likable plot. However I did get a little tired of the raining food thing. I did think the later-half of the movie got rather stupid and didn't make a whole lot of sense. My wife liked it a good bit and is already wanting to the see the sequel. So I'm guessing we'll be seeing it soon enough. I heard both movies did well with critics so I'm not expecting to be disappointed. Though I hear the sequel wasn't quite as good, so maybe I will be.

Our great grandgirl loved it, too

I'd probably watch more of these animated movies if I had a grandchild, which I don't. But my fingers are crossed that someday I will.