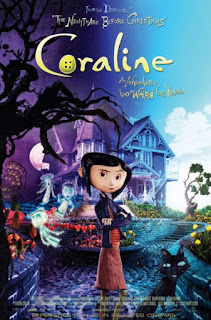 I do remember a little bit about Coraline back in 2009 but I didn't know much to be honest. I had literally thought Tim Burton was behind this one, but not at all to my shock. It certainly reminds me of A Nightmare Before Christmas and it does has the same director who is Henry Selick. But the story is based on a 2002 book of the same name. Coraline had a few years to have a fan-base and it certainly can't rival A Nightmare Before Christmas as people still cherish that movie as if a deity crafted the film. It was a big hit with critics, and was nominated for an Oscar for Best Animated Feature but lost to Pixar's Up for the year of 2009. But how good is Coraline really? 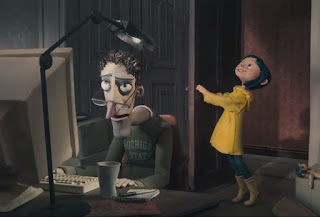 The film is (obviously) about a girl named Coraline Jones who moved with her parents from Pontiac, Michigan to Ashland, Oregon. Like many children in her situation, she is rather unhappy about the move. Besides losing her school and friends, the new apartment (which is really a house) is rather awful. It could use many improvements and Coraline is very curious about a little door that is now covered by wallpaper. She also has neighbors with two old ladies that live the basement, and a Russian acrobat who lives on the top floor. Her strict mother eventually loses patience with her and forbids her from touching the door once she suspects mice around it. But that doesn't stop poor Coraline from trying. 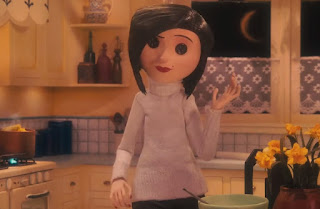 She discovers the door is a portal to an alternate reality. She discovers her "Other Mother" and her "Other Father" who look just like them except they have buttons for eyes along with every other person represented from her world in this new one. Everything in the world seems perfect with a perfect house and parents who care a bit too much about making Coraline happy. The only one from her world that enters the new one is a feral cat with no name. He's entered the reality long before Coraline and knows far more than she does. Luckily for Coraline, the cat can talk in this world but will she be smart enough to follow the cat's advice about the darker side of this new "heaven"? Or will she be stuck in a terrible gloom? 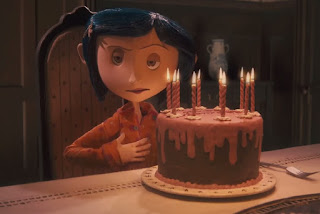 Coraline was about as a I had expected, it was really good but something that didn't quite affect me like A Nightmare Before Christmas did back in the 1990's. It's almost like a mix between A Nightmare Before Christmas meets Alice in Wonderland. I thought Coraline was a strong female character (something popular fiction really needs) but her successes do seem a little convenient. But the story is so darn creative and the art style still impresses me almost a decade later. Now I kind of wonder how I missed out on this movie for so many years. Especially as I met my wife Daisy a year later in 2010 and we've seen plenty of movies in our years together.

I really enjoyed this film. A bit creepy but it was nice.
xx

Sounds like cartoons / movies I like! I need to watch Caroline!
I wanted to see this in 2009 but forgot about it!

Our best friends' son-in-law worked on this movie

This was a cute one!

I really love this movie although the kiddos don't like it as much.