Fact of the Day: Erwin Rommel 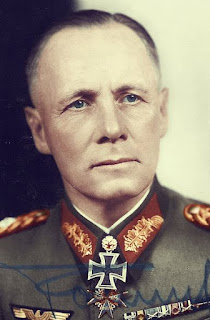 Erwin Rommel was a German general during World War II. Despite being one of the Axis powers' best military minds, he was praised for his skills by leadership in the Allied powers. He apparently (but this is disputed) had a some type of role in the failed 20 July plot (which was an internal struggle) to assassinate Adolf Hitler. It is believed that when Hitler found out, he gave the extremely popular Rommel the choice to face trial and lose everything or commit suicide to preserve his honor and protect his family. He chose the latter and was given a state funeral and an official day of mourning. The German public was initially told he died of a cerebral embolism.
Posted by Adam at 12:00 AM

Not a good way to go

He was one of the better Germans. He had a code of honor and he stuck to it in spite of what his Nazi overlords wanted him to do.

Probably one of the best generals of WW2 - certainly one who treated
his prisoners in the best way possible. There are some excellent biographies on this man. The Aussies in the desert war held him in the highest regard and after the war had reunions with the Afrika Corp, the British army led by Montgomery and the Americans led by Patton.
An interesting side note to the Rommel/Montgomery/Patton trio
is that their sons after the war became life long friends.
The only one still alive is the son of Montgomery.
When I was in Germany I made it my duty to some friends who were
"Desert Rats" against Erwin to visit his grave in Herrlingen,
a small town just outside Ulm. Rommel and his wife are buried in the
Lutheran Church yard cemetery. A simple grave in a garden setting with the Iron Cross as a marker with all Rommels awards carved into it. His home just further up the hill is now an orphanage and at the top of the hill is a large statue of him. One of the very few statues
of leaders (military) of WW2 in Germany.
Also in the church yard is a war memorial like we have in Australia, the USA and other countries with names of the deceased military of the town.
On this memorial Rommel is listed, just name, ROMMEL, E.J, then his
dog tag number - NO RANK!!!
This part of Germany is well worth a visit, I can assure any future
travellers. The name ROMMEL is still worth a lot of "brownie points".
Well done, Adam.
Cheers
Colin

Footnote: Erwin Johannes Rommel was a Field Marshall ( Generalfeldmarshall - the German name). He was the youngest
Field Marshall - the similar rank in the USA is General of the Army - the rank eventually attained by Eisenhower, Bradley and MacArthur.
Colin