Fact of the Day: Eva and Blondi 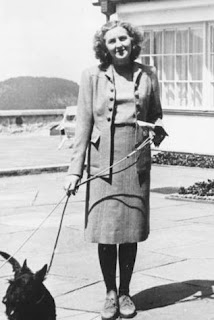 Eva Braun became famous after World War II for being the wife of Adolf Hitler when she married him shortly before they committed suicide as the Red Army marched on Berlin. Most people in Germany had very little idea who she was until after the war, and she slept in a different room than her future-husband and would rarely be near him in public. Even the Nazis in the German bunker were more upset over the death of Hitler's dog Blondi (whom she was reported to have hated) than her own.
Posted by Adam at 12:00 AM

Another screwed up nazi priority, maybe?

Wow, some things I can just never fully understand.

I bet Blondi got to sleep in his room.

A sad figure in history.

She does play an important role in the films and books about the Nazi time though.

A sad way to be remembered.

Yes, Steve - the poor girl/woman was a tragic figure
of history.
Lets hope Trump and his Bimbo fade as quickly into the
annuls of history.
God what next will this lunatic come out with????
Where are the "Sassys of Texas" and what can they
say to justify this creature's continued run to ruin
the World??
Now even the former directors and present directors of the
CIA are scared of giving him a preview of their work
and codes. The list got better this morning on the news here
- unbelievable - Hillary and Obama are the founders of ISIS????????????
No wonder the President of France feels like vomiting at the mention of Trumps name and the NYC police chief is having fits
of horror.
Oh what a mess this election is.
Colin

Of what importance??? About 99.999% of the population of the Third Reich never knew of her existence.
The last 2 days of Hitler as witnessed be people in the Bunker
was shown here on TV ABC history last night.
Such a pity that the rest of the World don't or won't watch
or have historical channels and I don't mean the Hollywood or idiotic talk back show varieties.
Colin