Fact of the Day: Nacho Man 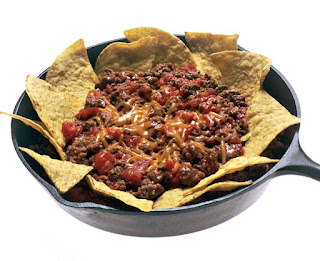 Nachos were invented in 1943 by Ignacio "Nacho" Anaya in Mexico. He owned a restaurant and apparently came up with the idea when American tourists came in to his restaurant. He used just a few ingredients of the little he had in his kitchen to come up with it. His original variety of nachos were fried tortilla chips topped with some melted cheese and spicy jalapeno peppers
Posted by Adam at 6:54 PM

Email ThisBlogThis!Share to TwitterShare to FacebookShare to Pinterest
Labels: fact of the day, Mexico

Some things just get invented on a whim

that's the way i like Nachos...chips cheese and peppers...NO meat for me..

And the rest is history, as they say...

Cool fact! Which reminds me -- I haven't made nachos for a long time. Hmmm....

I love nachos but the problem is they love me back by adding weight.