Fact of the Day: Tolstoy Pacifism 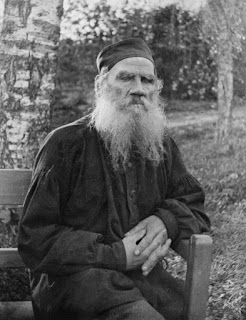 During a later-part of his life, Russian author Leo Tolstoy (famous for War and Peace among others) had a spiritual crisis which eventually settled with him becoming a Christian anarchist and a strong believer in pacifism-with-resistance. His philosophy would later influence Martin Luther King Jr, and Mahatma Gandhi.
Posted by Adam at 12:00 AM

I will definitely read more about this! Sounds really interesting.

Never knew this about Tolstoy. TY for sharing:D

Sure paved the way indeed

Ohh wow...pacifism. Haven't read the book (shutup). Definitely will now. It probably shows the pacifism in him secretly.

I wonder if Tolstoy read any Henry David Thoreau? I bet he did.

It seems he really did pave the way.

Don't know much about Tolstoy so this increases my knowledge.