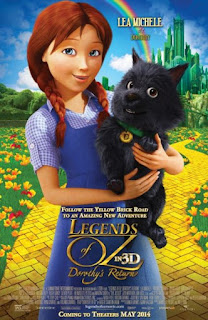 Legends of Oz: Dorothy's Return was something I wasn't quite expecting I'd watch as soon as I did. The Wizard of Oz is one of the most iconic movies to ever exist. This one came shortly after Oz the Great and Powerful which I liked a lot but some fans and critics were not as pleased. I heard this one was not nearly as good and I had assumed it was a direct-to-video kind of thing, but no to my shock this one was a legitimate theatrical movie. And it did horrible at the box office and with critics. Can it really be that bad? 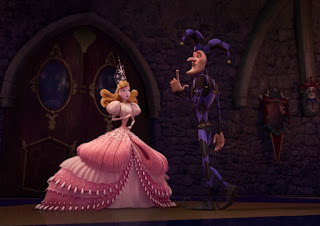 The story is a set a few years after the events of the first movie, at least for the people of Oz. To Dorothy Gale however she hasn't been back to Kansas for long in Earth-time. The Wicked Witch of the West's brother (who she turned into a Jester) has take her broom stick and added more magic to it. He wants to rule Oz and one-by-one imprisons every regional ruler of Oz including the powerful Glinda the Good Witch of the South. The Tin Man, Cowardly Lion, and the Scarecrow send a distress signal to Dorothy Gale in Kansas. She is captured by a rainbow made by the trio and she goes back to Oz this way. When she arrives in Oz she finds a world she wasn't quite familiar with when she visited the first time. 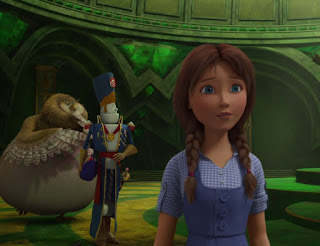 Of all the parts of Oz Dorothy has seen is pretty much in ruins thanks to the Jester's failed leadership and evil plots to take over the lands. Dorothy must save her friends who she can't seem to find. She teams up with a big fat owl who can't fly named Wiser, and a marshmallow soldier named Marshal Mallow to save her friends. The Jester is more than aware of her existence in Oz and the threat she is to his reign. So he sends far worse at Dorothy and her new pals than his sister ever did. But Dorothy is not much more than an ordinary girl with no magic. Will she be able to banish the evil Jester from the land of Oz? 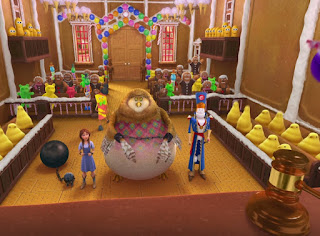 Is Legends of Oz: Dorothy's Return better than I expected? Actually so, it's based on one of the much later books so it's not like some Hollywood idiot wrote it as a glorified fan-fiction. There are a few things that don't make sense to the original story, but I think they did the land of Oz justice. It's just that the plot is rather simple and easy to predict. It's certainly not even close to the classic original The Wizard of Oz film that's for sure. But since it did rather poorly, this may be the last of these kind of projects.

It seems this story has gotten enough play and it's time for newer, original stories.