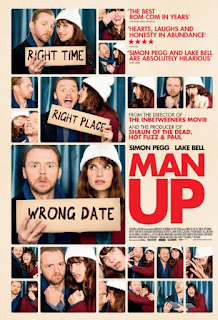 Man Up is something I had no idea existed back in 2015 when it came out. Most British films come in rather low-key in America so that's not a shocker. But I love movies with Simon Pegg as he's usually pretty funny. Shaun of the Dead was pretty good (though I think it's a little over-rated), and Hot Fuzz is one of my favorite movies ever. Man Up is obviously a romantic-comedy, which is something I usually avoid. But the concept of meeting the wrong person on a blind date (especially with the person at fault is a woman) is interesting enough. Critics and the regular folk seemed to be pretty positive about the movie so I wasn't expecting a train-wreck. And thankfully it's not, but is it Simon Pegg's better movies or just decent enough? 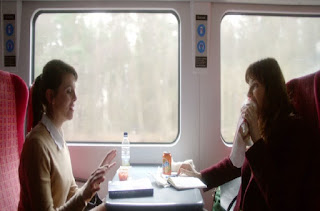 The movie is about a woman named Jessica, who is horribly pathetic at 34 years old. Her sister urges her to go out and mingle with people. A pair of friends are having an engagement party and she slowly convinces herself to join the crowd. She meets a guy there and things seem pretty good at first, until it all falls apart before the hour is over. Her parents are having a party to celebrate their 40th wedding anniversary, so Nancy takes the train back home. On the ride she sits right next to Jessica, a woman ten years her junior. She's more optimistic, and much cuter than Nancy. Jessica is super-obsessed with a new self-help book that is suppose to improve your life. Thinking Nancy needs a lot of help, she gives Nancy her book when she falls asleep. Nancy wakes up and finds the book and angrily tries to return it to her. 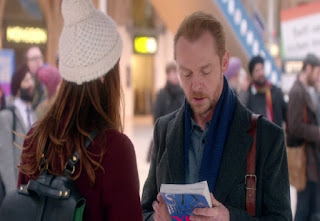 Nancy accidentally meets a man named Jack who was set-up by a mutual friend for a blind date with Jessica. Jack sees Nancy with the book they were both supposed to read and assumes Nancy is Jessica. Jack is too energetic and excited for her to correct him, and she awkwardly pretends to be Jessica. Now she must go on a grand date pretending to be a much different person than who she is all the time. Can she get through the night without Jack finding out Nancy isn't Jessica. And what happens if Jack is Mr. Right and she pretended to be Mrs. Wrong? Things get very stressful for Jessica when she bumps into a old "friend" on the date who has a massive (and very strange) crush on her. 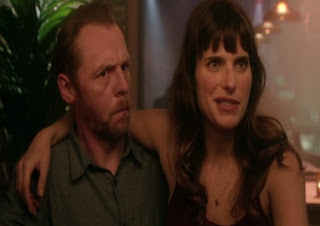 Overall I liked Man Up a little less than I expected. I guess I'm not one for romantic comedies, so I wasn't terribly thrilled much of the time. You'd always expect a man to pretend to be the awkward person to wander into the wrong blind date, so I thought the reversal was a neat idea. I also did really like the scene with the fire-extinguisher. I did think the character of Sean kept the plot interesting, though I'm surprised by how much toleration he is given by the majority of the characters. But given how much I distrust romantic comedies (or romantic movies in general), the fact that I like it is certainly a very positive thing to say about the movie, but certainly not even close to Simon Pegg's best work.

I actually enjoyed this one, although I can't remember much of it.