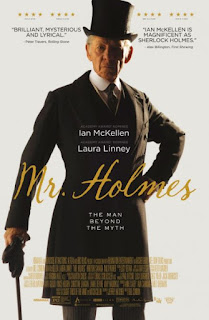 The very recent movie Mr. Holmes came out of nowhere to me. I had heard of it a few months ago and I knew I'd eventually see it. Sherlock Holmes was always a classic character but what really wowed me was the most recent TV series (not the American one) with Benedict Cumberbatch and Martin Freeman. Their Hobbit co-star (who famously plays Gandalf the Grey) Ian McKellen takes the role of Sherlock Holmes this time. Instead of a Sherlock set in the modern world, this one shows the Sherlock of his original time but at the end of his elderly days as an extremely old man. It's certainly not a Sherlock story I've ever heard before, but the big question is if it is any good or not? 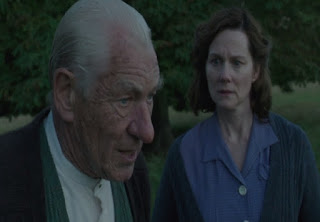 Since Sherlock Holmes was a young man in the Victorian Era, by the year 1947 he's by far older than anyone ever has seen him before. He's been retired from the detective business for many decades now, but still possesses his unique abilities to solve almost any mystery. He now lives away from 221B Baker Street, and he now resides in a country cottage. He lives with a housekeeper, and takes a friendship with her son Roger. He tells the curious Roger about some cases of his past. His good friend John Watson had written many of his stories wrong and he's determined to get them right. However with failing health, he's having a terrible time trying to remember all the details. 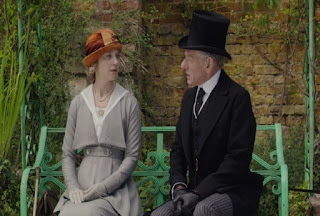 The two most important cases in the movie Mr. Holmes are from the past in Sherlock's last days of detective work. One is about Sherlock's trip to Japan to see Tamiki Umezaki who is a big fan, and helps Sherlock find a Japanese-native plant that is suppose to restore his memories by improving his brain health. The other is an older case where is tasked by a husband to see why he is wife is troubled. While both instances seem to be father simple and straight-forward, there's more than meets the eye. And before Sherlock Holmes passes away from this world, he wants to have peace with these cases with no regrets. 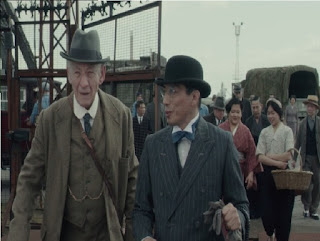 Overall I was a bit disappointed with Mr. Holmes. It's certainly not a bad movie, just not what I had expected. I also thought the story making a more "realistic" Sherlock Holmes kills a bit of the fun of the character. Ian McKellen plays a convincing Sherlock Holmes as you would kind of expect the character grown and bitter to act like that. And the mystery solving wasn't as fascinating as they had been in other tales. Though I did love the friendship between Sherlock Holmes and Roger and their hobby of bee-keepers. While it's not the greatest Sherlock adaptation, I appreciate what the film does right.

We enjoyed this movie well enough too. Ian McKellen did a great job.

I've heard good things but have yet to see this one.