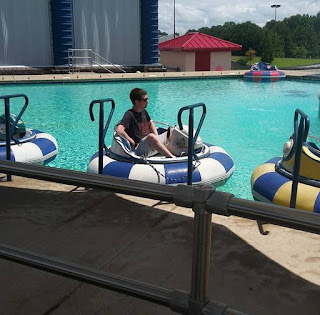 During our time at Frankie's Fun Park in Greenville, South Carolina I wanted to make sure we rode the bumper boats. We had one at a place in Spartanburg called International Pavilion when I was a kid. But shortly before we were going to ride it, some little girl fell out of the boat and nobody was able to save her. This happened shortly after the park opened and until it finally closed when I was high school, I never saw it running even though they didn't demolish it. I was a little concerned about the safety of this one though. I couldn't tell how deep the water is, there is no real life-guard, and the boats don't even have seat belts. Though it is highly unlikely that you can get knocked out of one of these. You really have to be stupid to get into trouble. 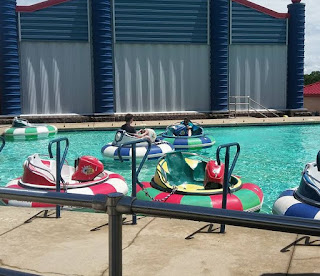 Bumper boats seemed to be the least popular thing here so we didn't expect anybody else to join us. So it was just me and Daisy out in the water. The bumping is gentle and not very fun to be honest. Your boat can shoot water which is fun. 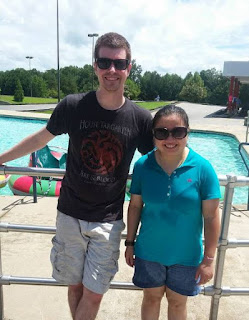 Funny enough we got more soaked during the rain while playing mini-golf than we did here. The sun was more brutal and I was glad when it was over. We had fun but I doubt we'll be getting on the boats anytime soon.
Posted by Adam at 5:00 PM

We had these for a short time here in our town...I took some of the grands for a ride on them, and they laughed and squealed the whole time, having fun..such gentle bumps that I never considered any danger from them.

I've never been on them before. Looks like fun.