My Favorite Photos: Tennis with Teresa 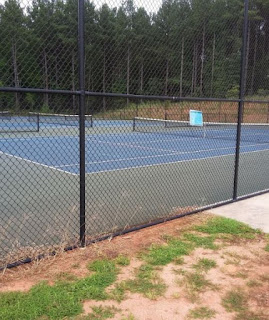 I haven't played tennis in quite some time, so my co-worker Teresa mentioned she wanted to play so Daisy and I met her at a local park in Boiling Springs, South Carolina called Va-Du-Mar McMillan Park. I've never been on these tennis courts, but they're in decent shape. They're also blue instead of the traditional green but that doesn't matter. We mainly played for fun, didn't keep score, and ignored some of the stricter rules of the game. We called it a day after about two hours when Teresa hit the ball but dropped the racket and it went flying for a few feet. When the ball went in my court I missed because I was laughing. 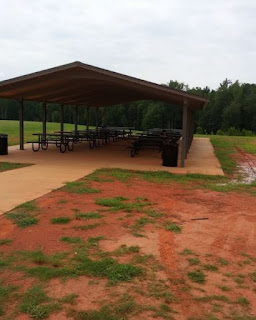 Daisy doesn't like sports much so she spent much of her time reading under the canopy here with the picnic tables. 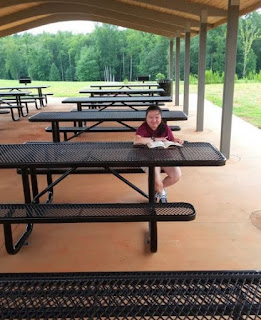 She picked up Harry Potter and the Cursed Child and is in quite the hurry the finish it before she brings in back. I don't plan on reading the whole thing because I really dislike that it's a script for a play and not a novel. I also think J.K. Rowling did not write as much of it as many think she did as she had co-authors John Tiffany and Jack Thorne helping. So I read the general basis of the plot and there are a few good twists, I don't like some of the things in it. Like there is apparently some very harsh words said between Harry Potter and his son Albus Severus Potter, and from the tone it sounds it just seems very unlike the characters to me. I also wouldn't want to see play as it is. I've seen photos of the cast and the majority of them look so wrong to me.
Posted by Adam at 5:00 PM

Interesting that we're both writing about tennis.

I wouldn't mind trying out tennis at some point, just for fun.

Great to read that you are getting outside for some active
open air sport.
The courts look in good order - blue surface is quite common these
days for hardcourts.
Colin

I haven't played since high school!

Sounds like a fun day no matter what each of you chose to do.