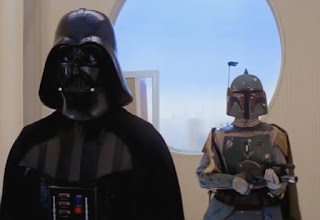 As far super-fans go, Star Wars has some of the oldest and most loyal followers. I wasn't born when the original trilogy was out, so when I finally saw Boba Fett, frankly I was unimpressed. I can see exactly why people liked him. He had a cool helmet and a mysterious past just like Darth Vader. You could say Boba was the Han Solo to Darth Vader. Well not really, as he was just a pawn of Jabba the Hutt and he'd just talk to Vader about his bounty on Han Solo. Calling them friends would be stretching it. 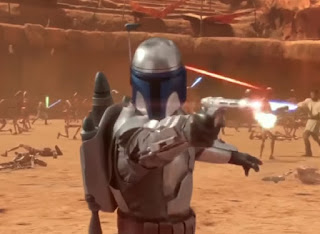 Honestly his father Jango Fett was the far more interesting character. His body was the basis of the Clone Army, he certainly was not a good guy but not quite an evil one either, and he managed to fight off Obi-Wan Kenobi. We knew far more of Jango in the prequels than we ever did of Boba during the first three original movies. 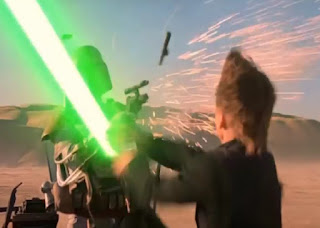 Boba's only real moment to shine was after Han was captured and he tried to kill Luke Skywalker. Didn't work out and Han Solo accidentally killed him by knocking him into the sarlacc pit. What a lame and (cheap) way to go. Fans had pressured writers of stuff that takes place outside of the movies to make seem like that Boba survived his time in the sarlacc pit. That's even lamer. When characters die, they need to remain that way unless the author intended it from the start. 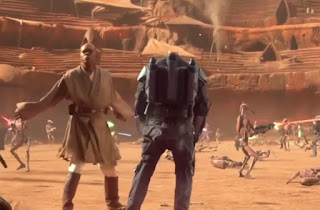 I hope nobody tried to revive the dead with Jango through some comic-book or novel most fans ignored. The guy lost his head and Mace Windu somehow managed to make sure the helmet he was wearing bounced off perfectly fine (and amazingly undamaged) so a younger Boba could pick it up and wear it forever. How sweet.

Do you think Boba Fett's character was more hype that substance?
Posted by Adam at 12:00 PM

I always thought Boba Fett was given the short shrift by being tossed into that pit. They could have done much more for the character.
Same goes for Darth Maul. Now THAT guy made The Phantom Menace almost watchable.

I never knew people wanted to revive his character, but it does make sense considering how many thought his death was pretty lame. I also like his father's character much better.

Not like Admiral Akbar. Talk about overrated! That guy couldn't even figure out it was a trap until it was too late to matter.

I saw the first Star Wars when it came out. I remember how excited we were and how amazed. Not too amazed at Boba Fett though.

Most things related to Star Wars are over-rated in my opinion.

Both Boba and Maul (as mentioned in this thread) were pretty cool; maybe not overrated but perhaps have a dedicated fanbase.