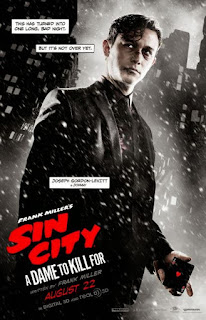 While I only watched the original Sin City earlier this year (in February) I do remember the hype around the original when it came out. But the first Sin City came out in 2005,  and it took almost a decade for a sequel to emerge which was a bit odd. I also heard the sequel wasn't nearly as good but I'd figure I'd give it a try anyway. Like the original, all the stories are based on Frank Miller's comics and Frank Miller himself also worked on the sequel movie like he did with the original. I also noted some actors not returning like Clive Owen being replaced Josh Brolin as the very important Dwight McCarthy, and Jamie Chung replacing Devon Aoki as the deadly ninja assassin Miho. 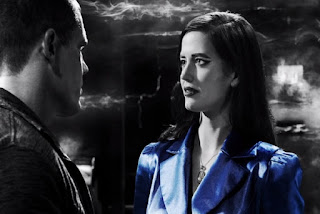 Obviously all the stories here take place in Sin City which is not Las Vegas. Some of the stories are a prequel to the original while others are a sequel. Which does make it a little confusing as I think remember some of these characters dying. But you also can remember some of the places and events that took place in the original and how the sequel connects itself to the stories. One of the most important stories involves Dwight McCarthy. He encounters his old girlfriend Ava Lord who pleads that she needs his help. She married some rich guy, but is feeling mistreated. So she attempts to get Dwight McCarthy to fix this situation. But unluckily for Dwight McCarthy, his adventure with Ava Lord will not be an easy one. 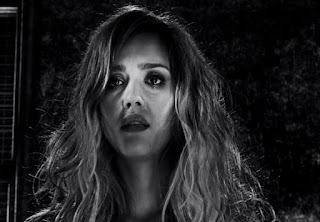 The other stories mainly involve the people who were wronged by the evil and extremely powerful Senator Ethan Roark. One of them is a young man named Johnny, whom is Senator Roark's bastard son. Unlike Ethan Roark Junior, the Senator has no love for his illegitimate child. Johnny badly wants to embarrass his father in front of those in his circle. Another is Nancy Callahan whom Ethan Roark Junior had tried to kill twice and she was saved by the now-dead John Hartigan. She hasn't gotten over his death after a few years. She decides that there's still one person left in the world that will give her peace once she's gotten her revenge. But will she be able to be as strong as the man she had idolized? 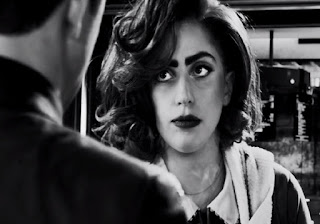 I can certainly see why many did not like Sin City 2. The first movie probably collected the best of the original stories, so we got the ones that were considered second string. It still looks beautiful and is very unique in this way. And the 2nd half of the movie is certainly far more interesting than the first. Even though I wasn't the biggest fan (I liked it but didn't love it) of the original, I can't imagine too many people prefer this one over it. Since it took almost ten years for it to come out, it also seems like it was too little too late. Though I have seen far worse sequels that disappointed me far more than this one did.

I really enjoyed the first one. Greetings!

I haven't seen it either.
Hope you and Daisy have a great Sunday.

I haven't seen this one....have a great Sunday

I watched the first one and was really impressed by the style!