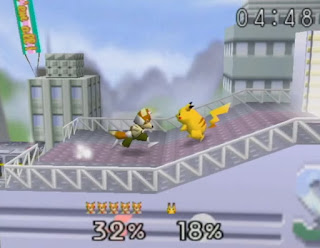 Through my childhood friend Ben, I learned of Super Smash Bros. which came out on the Nintendo 64 back in January of 1999. It was one of the rare times where I only knew about games when they first came out instead of months/years before. Compared to the newest one for WiiU/3DS, it was basic and perhaps even "boring" but I remember just endless hours playing at his house. Then I got a N64 of my own and had many more of those endless hours against my brother. This helped spark my real passion for video games as for a good period during the 1990's nobody in my household got any new games. I also remembering the insane level of hype I had for its sequel Super Smash Bros. Melee which came out in late 2001. One of the few things where the hype actually met the actual thing.
Posted by Adam at 7:00 PM

i played a few video games with grands but not too much..the grands were too good at them and beat the pants off me...LOL

This game was everything!