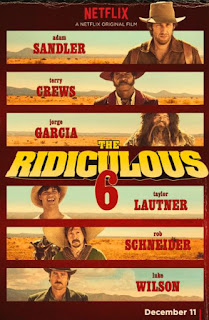 While Netflix is well-known for their original shows, they haven't really done much with original movies. Which I can understand to be honest, but they've cranked out more of them than I expected. I had heard of The Ridiculous 6 last year and I heard it was pretty bad. Adam Sandler movies usually get pretty ridiculed by critics so I was a little optimistic. But to be honest it did look fairly dumb (especially Taylor Lautner's character Lil' Pete), but curiosity got to my cat and I eventually sat down and saw it. Adam Sandler had past his prime shortly after he left Saturday Night Live, but he's made a decent movie or two since the 1990's. Is this one a decent comedy or is it one of his worst films he's ever done? 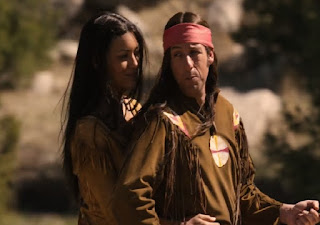 The main hero of the story is Tommy "White Knife"Stockburn who was orphaned when an evil man shot his mother dead. He was raised by a local Apache tribe of Native Americans even though he was Caucasian. More Native American by spirit, Tommy has to live in a Old West that's not too kind to the "Indians". While he tolerates some of the ignorant comments by people, he's not afraid to inflict justice on those who cross the line. He is set to marry a beautiful Native American woman named Smoking Fox who is worried she'll be a widow longer than she will be his wife. Before they are married, Tommy meets Frank Stockburn his estranged father. While the two reunite Frank's old (and evil) buddies cause havoc and take Frank away. 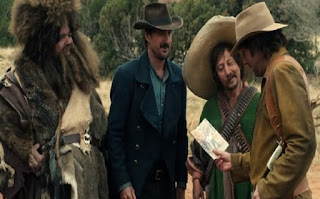 Determined and desperate to save his biological father Frank and get closure, Tommy decides to figure out where his father is and how to save him from the bad guys. He ends up meeting (by mere accident and a lot of luck) his half-brother (and half-Mexican) Ramon and he joins his quest to save their dad. And one-by-one the two meet even more of Frank's unknown children and the six brothers team up to save their father even though none of them except Tommy has met the man before in their life. But will they be able to save him and will they all end up one big happy family? 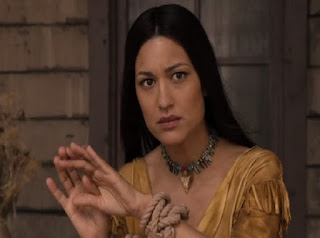 Honestly I can't really say if The Ridiculous 6 is Adam Sandler's worst movie, but if it's not then it's a strong contender for the title. Adam Sandler makes so many movies that he's now sacrificing almost all the quality for the quantity of films. I tried to like it, but it's really not funny at all. I heard some Native American groups were upset during filming about the portrayal of the fictional Apache characters, but I think they were presented as good and likable people so I will say that as a positive thing for the film. The movie also has many other stereotypes and while I don't think any of them were meant to be racist (rather satire) but they've done is such poor taste that you just might as well think so. And the twist at the end was just dumb and pointless.

I haven´t see this film! But is not my style
xx

You know....I've always wondered about this when I see it on Netflix. That's good to know this is a pass:( I actually really like Adam Sandler but there's only so much bad movies I can watch....

One horrible movie, he looked bored the whole time he was doing it.

Haven't heard anything good about this film.

I think I'm the only person who likes this movie. Hahaha
Yeah, Adam Sandler gets a lot of hate for his recent films but I still find them pretty funny. I am a noob.
P.S: I deleted the last comment because of a type-o; I can't stand those things! >.>