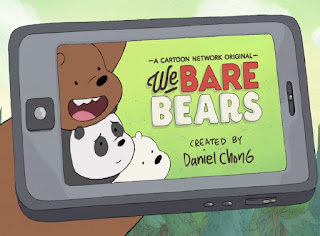 The other day I saw a little thing Cartoon Network did for the Rio Olympics which featured characters from their show We Bare Bears. As a few of you know, my wife loves stuffed animals and she has many. Her favorite is a polar bear with a red bow-tie. I figured she'd like this show and after seeing a few things it seemed pretty smart and funny. Not all cartoons cater to those who can't even read, as some of them have been fairly smart and funny like Spongebob Squarepants and The Simpsons. This show was based on a rather unknown comic series known as The Three Bare Bears which was quirky and had a lot of dark humor. Most of which kind of carried over for the show version. 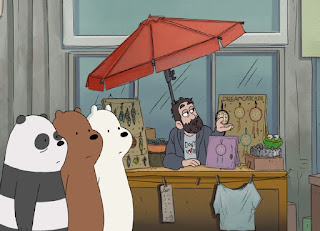 The three main characters are a sort of co-adoptive set of bear brothers. You have the oldest (but they're all about the same age) Grizz, the grizzly bear who is often confident, social-able, and the leader. There's Panda (often nicknamed Pan-Pan) who is socially-awkward and is in-love with his phone. Then there's Ice Bear, a polar bear who talks in the third person and really doesn't care what anyone thinks. He likes dancing, cold temperatures, and sleeping in the refrigerator with his favorite axe. While the brothers had traveled all across the country most of their lives, they mainly reside in San Francisco in California. 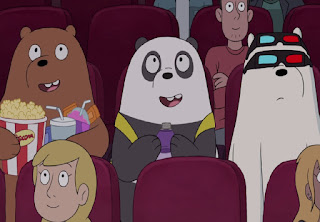 But there is not a real central story-line. Just each episode is about an adventure in some way with the brothers. Like they end up going to the movies and become ninjas to shush the annoying people in the audience. They also try to become internet-famous and fail miserably. While they are grown-up, you do seem them as baby-cubs in flashbacks. They also form friendships as one of their friends is a child-genius named Chloe Park, and another is a very annoying bigfoot monster named Charlie. They also form some hatred for others such as the stuck-up koala named Nom-Nom and Ice Bear can't stand a crab that Grizz decided to adopt from the super-market. 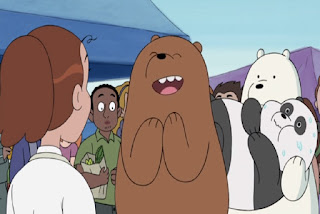 Overall Daisy and I really liked We Bare Bears. I had hoped it wouldn't turn into a rather mediocre mess that a lot of cartoons end up being but it turns out to be a rather clever and funny show. Mainly because they keep a lot of dark humor in the show especially when it comes to Ice Bear. There's also a lot of humor that only millennials will get as much of it's based on our culture of internet memes and past/new fads. But since most of the dark humor is kept as innuendos, most of the younger generation is going to like this one too. I haven't liked a new show from Cartoon Network probably since I was in high school, so they really did a good job with one. Season two isn't over yet and we'll have to wait for it be until we can see it, but I remain optimistic.

I remember thinking, "What a hipster show for kids!" then I started to enjoy watching it. -__-
Ice Bear reminds me a lot of my husband. hahaha