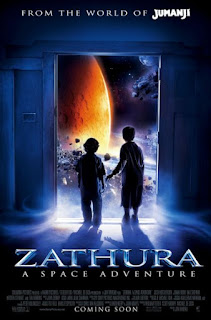 Zathura is a movie I never heard about back in late 2005 when I was just a senior in high school. I do remember and loved the film Jumanji with Robin Williams back in the 1990's. I had heard this was a lot like Jumanji and that certainly is true. It's actually based on the book of the same name by Chris Van Allsburg who wrote Jumanji among several stories. So Zathura is really the sequel of Jumanji thought the film makes no real reference to it. I also noticed a very young Josh Hutcherson who would become far more famous in The Hunger Games movies. I also saw Kristen Stewart who wasn't as well known back then until she starred as Bella Swan in Twilight.  Zathura did decent with critics (actually much better than Jumanji) so it did have promise. Is Jumanji in Space exciting or is it just a big case of de ja vu? 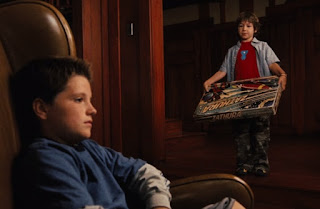 The story is about two brothers who are spending time with their stressed-out but loving father. Except they have an obvious struggle on who can get their father's attention, but due to work their father can't spend all day with them so their older sister Lisa Budwing is tasked to look over them. The oldest brother Walter Budwing tries to ignore the younger brother Danny, but eventually plays a board game with him that he found in the basement. Danny is always outclassed by his brother due to being a few years younger, except in board games. But Walter swears he is a big cheater and that's the only way he wins. When they play Zathura they notice something very strange going on when the board starts to move. 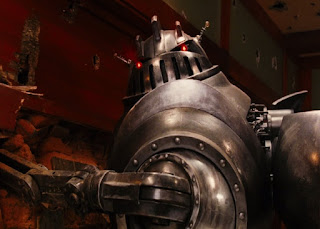 Their house goes straight into space and far away from the planet Earth. They first have to dodge meteor showers in the form of small rocks coming out of the ceiling at crazy speeds. Another struggle is a large defective robot who walks into the living room. Except he will stop at nothing to destroy Walter Budwing as he thinks he is an "alien life-form" that doesn't belong there. Not all moves on the board are bad for the two brothers. They will get allies and foes in their journey. But they read that the only way to return home is to finish the game. But will they able to survive by the time that happens? Or will an inter-galactic menace destroy their house, and their very existence? 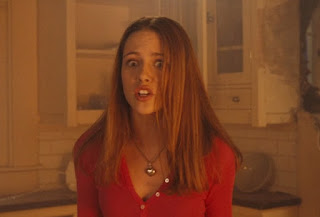 I don't think Zathura is nearly as good as Jumanji. Though I did have a lot to relate to in the movie as I was the younger brother, and Walter reminded me of the meanness from two of my older brothers when we were little. But I think what holds Zathura back is the whole game takes place in their large house instead of a big town like in Jumanji so there's not as much variety and logic is often thrown out the window. There's also a bit of a plot twist in the movie but I thought it was more stupid that it was clever. But it's a decent movie, but honestly decades from now I'll probably forget all about Zathura but I'll still remember Jumanji.

Haven't seen this one but our son loved Jumanji and even named his pet rat Jumanji.

Yeah, it was meh at best. Jumanji was waaay better

Never heard of this before, thanks for sharing!