Ask Me Anything! Answers Round Five 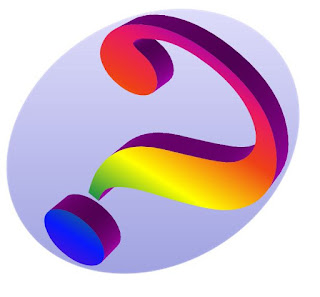 Awhile ago I asked you'll to ask me anything you'd like. If you would still like to ask (or ask another) please do so below. I appreciate all questions, even the personal ones as long as they are respectful. 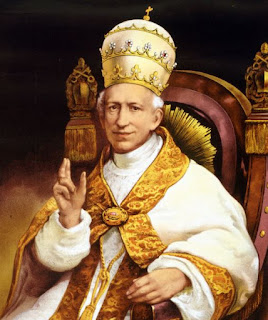 Martha asked two, one was If you could change anything in this world, what would it be?

For the fall of "organized" religion as its done too much harm to the world. Religion should really be a personal matter left for the individual to learn and understand. Even the pagan religions of mankind's past had far too much power. When Christianity became popular in Europe, the Catholic Church grew into its own monarchy and pseudo-nation for that matter. There was even times where Popes tried to let Kings know that they were outranked by their funny hat. They were so desperate to have power that wars waged again and again when dissenters left the church and eventually morphed into Protestants. Though the new Protestants were often as bad as the Catholics.

Abrahamic religions were never too keen on the whole "tolerance" thing. Judaism is certainly much more peaceful historically than its spin-off religions, but if you ever read much of the Old Testament (the only thing in Judaism Christians think is holy) there is a lot of racism, misogyny, and many endorsements of things that would be have people put behind bars if they tried them today. Whoever wrote these "stories" were not exactly a understanding group of people.

Civilization learned that church and state should stay just friends not married, or at least on paper. Very few countries in the world have a state religion anymore, but countries often act like it. The Catholic Church still has major influence in much of South America. Then there's politicians who want their god put into everything.

We look at the Middle East and you can see how well religion and government mixes in the 21st century. Even if nations with a Christian-majority didn't intervene in the Middle East, Muslims would go back to fighting each other. The battles between Sunni and Shia Muslims are just too much like Catholics vs. Protestants centuries beforehand. I read somewhere that in the Quran, a Muslim is not allowed to take the life of another Muslim. They avoid this with a loophole, one side won't consider the other to be true Muslims.

The Middle East also has laws that have little to do with international conflicts, like being born into Islam. While many people think a baby born to two Christian parents is "Christian" mainly because it's assumed they'd raise him or her as such. In the Middle East it's a bit different. A child born to a Muslim father and a Christian mother (which isn't as uncommon as you'd think) is considered to be Muslim. If the father dies before the child really knows him and is raised Christian by the mother then the child is often considered an apostate without actually rejecting the Quran personally. Apostates are often met with grim fates in these countries. That's a horrible reality for these people I think.

State-atheism wasn't very good under the rule of most of the Communist nations. While communist had very little belief in the after-life they agreed with the Catholic Church of olden Europe, the Church of England during/after the reign of King Henry VIII, the Caliphates of Arabia, and many others that power is everything.

Some may call me a cynic, but when people are harassed, lose their jobs, or die because they answered wrong to the "god question"  then it's more than a little concerning. 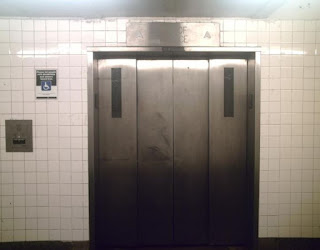 Martha's 2nd question was What is the scariest thing that's ever happened to you?

I've been fairly lucky so far with this. I'd say in terms of "horror movie" like scary would be during a church-trip to the beach when I was still in middle school. We stayed at a hotel with many floors. Not exactly a Hilton but not a bad hotel either. The way to get to the rooms and the elevators was mostly outside. One night we went down to the bottom floor and went back into the elevator to go back up. Looking back this was just paranoia, but I remember being alone and seeing a man in the shadows coming closer to the elevator. I freaked out and pressed whatever button I could to get that door shut. Shadow Man had to wait for the next one. 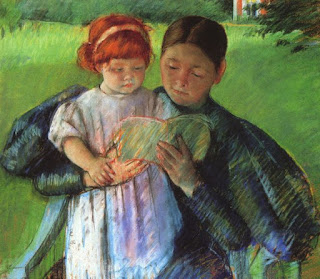 Deb asked Where do you learn most of your interesting facts for your blog?

I started the facts of the day mainly because I loved them as a child and as a student in school. A few teachers did them including one who'd write one each day on the board. A few years after high school I decided that I should try some and I loved them. But the main way I find them is by reading stuff and finding them by "accident".

You'd be surprised that almost any subject has something interesting about it. Every time I notice something, I write it down or keep some kind of note of it electronically. Then when I get the time, they become facts of the day.
Posted by Adam at 10:00 AM

Great answers, and it's always a pleasure seeing a Mary Cassatt pastel.

I would love to learn more about space! Any detail about it would be interesting.
Pschycology is also very interesting!
Thank you for stopping by my blog, and leaving me a nice comment :)

If it's not too late - where's the coolest place you've ever been?

Also, very interesting to hear about the process behind the blog. I love fun facts, too, but have never been nearly as good about finding/sharing them.

Are you happy be married? I think Daisy she is so sweet but I know married life is not easy :)

I agree with you 100% about organized religion. It has a lot of crimes to answer for. And "crimes" is NOT too strong a word.

I want to be more spiritual but religion hasn't helped me either.

Wonderful post, Adam! I truly enjoyed your answers, especially about religion. I believe in complete separation of church and state. I also believe religion is something personal and should be practiced that way. It has no business in politics. None.

Love all your answers!

Great answers! I totally get where you are coming from on organized religion!

I agree - almost any subject has an interesting element to it. I'd also say that even if 99% of society finds something boring, we shouldn't mock those who do find said thing interesting.

Awesome! I love your facts!

I absolutely agree with you about organized religion! It has been the cause of so many terrible things in this world! You are truly an intelligent and articulate person! I love it when you get going on a topic you are passionate about!