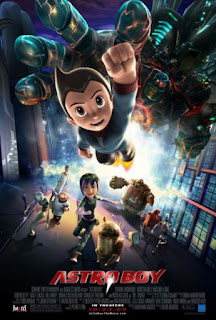 Astro Boy was originally a Japanese manga (comic book series) that was turned into an anime (cartoon show) the debuted in Japan originally from the 1950's-1960's. The anime was remade in the 1980's and again in the early 2000's with all three of them getting an English dub eventually. I never saw the cartoons but a really good game based on the show called Astro Boy: Omega Factor was one of the best games for the Nintendo Gameboy Advance. I really can't remember if I recall the 2009 major movie or not. Apparently critics were mixed and it didn't do much at the box office. Heck it was considered a flop in Japan, which should have been its best place as the series was almost like the Japanese version of Mighty Mouse. They did put some effort in the American version of the movie with an impressive voice cast including Nicholas Cage, Kristen Bell, Bill Nighy, and Donald Sutherland. 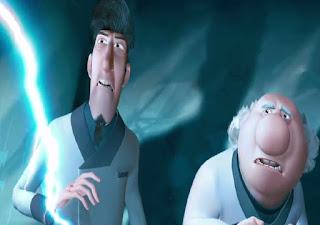 The film (like it's origin series) is set in the future where robots have basically taken over for mankind when it comes to "labor". While humans still have to worry about education, research and the arts, robots have taken care of their daily needs. Dr. Bill Tenma is tasked to helping President Stone (of a city-state known as Metro City) on a new task that will be a huge leap in robotics. They have a new type of "blue core" energy that they put into a giant robot known as a peacekeeper. Dr. Tenma's young son Toby sneaks in to take a peak and gets on the wrong side of the wall. The robot malfunctions and Toby is vaporized. Grief-stricken over the death of Toby, Dr. Bill Tenma decides to build a robot that resembles Toby and will have all of his memories. And the new boy-robot will be powered by that same blue-core energy. 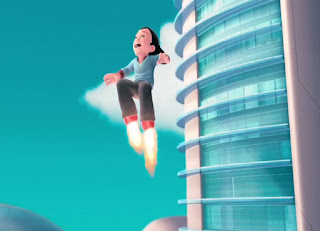 "Toby" wakes up and doesn't realize he's actually a robot. But the truth will come out eventually. Dr. Bill Tenma has a moral crisis of sorts. He eventually realizes that this robot will never replace Toby or fill the gap left in his heart after the death of his son. "Toby" is rejected and he flees into the real world. But not long after President Stone realizes what Dr. Tenma has created and he is after the robot's blue-core energy as he thinks it's vital to his re-election. But "Toby" takes on the name Astro and hopes he can be a hero. Whether he likes it or not, Metro City will soon need a hero like Astro Boy to save the day. 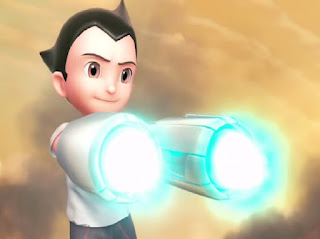 The 2009 major movie of Astro Boy was a little worse than I expected. Now I can see why critics were a little less enthusiastic with this one. I think part of the problem is they're not very creative in this one. Kind of reminds me of the movies Superman III and Superman IV. There was plenty of amazing stuff in past shows and comics to base things off of, however they kept it plain and stale when it came to villains and whatnot. But I still think it's a fairly likable movie, but unless Japan is hungry for another anime series remake this could be the final project for Astro Boy in the world because I really doubt we'll ever see another movie like this again.

Hm I've never heard about this before! Sounds pretty good!

astro boy is quite famous as in the name. never actually watch/play. guess gotta give it a try.!

Another one I missed.