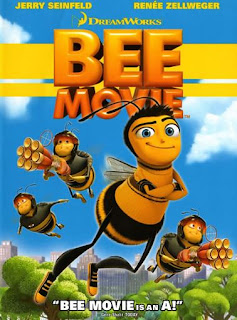 I do remember when Bee Movie came out in 2007 though I didn't care about seeing it. I think I can even recall them making a video game based on it though I never played it. It was on my "watch later" list for almost an eternity until it finally had its chance. I did remember that the legendary Jerry Seinfeld was the bee, but I didn't know he also wrote this movie along with some other people. Of course Jerry Seinfeld's best work was with the TV show Seinfeld but the man has talent. Bee Movie was by Dreamworks and not Pixar, but with a man like Jerry Seinfeld they certainly had the talent to make a very good movie for everyone in the family to enjoy. This couldn't possibly go wrong right...right? 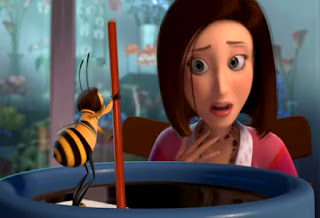 The hero bee in the movie is Barry B. Benson. He is fresh out of bee college and is faced with the choice of picking a job at the bee-hive. He can pretty much be anything he wants but he is upset that the job is for life and there is no 2nd chances. Instead of throwing his life away, he wants to see the real world before he works until the day he bee wings no longer move. He meets a woman named Vanessa who saves him from being murdered by her boyfriend Ken. Feeling like he owes her a thank you, he breaks the law of his fellow bees and talks to a human. Vanessa is shocked beyond words that bees can talk and that Barry Benson is fairly intelligent. She gets very curious about his life and they form a friendship. 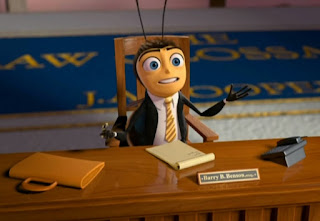 Everyone at the bee-hive is shocked about Barry's adventure in the human-world. His parents can't figure out why he just doesn't want to make honey like the rest of them. While hanging out with Vanessa, Barry sees honey jars for humans to take home and consume. Barry is outraged as he knows how much work bees put into making honey. He was born and lives in a natural bee hive, and he's even more upset that humans have created artificial habitats for bees to work for their benefit. Vanessa helps Barry with something nobody could ever expect. Barry wants to sue the human race over the honey issue on the behalf of the bees. But can one simple bee and a florist really have a chance in court? 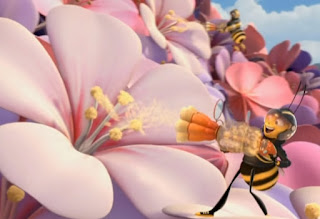 Bee Movie is about what I had expected, it's good but not great. I can only imagine how terrible it would have been without Jerry Seinfeld. The humor is a bit clever, but nothing that special. And the story has its issues and drags on for a bit too long. And the whole relationship between Barry Benson and Vanessa was just plain weird to say the least. While Toy Story, Shrek, and Finding Nemo will last generations, Bee Movie will be almost forgotten in another ten years. I don't expect to see anyone celebrating it's tenth anniversary next year not even Jerry's crazy fictional neighbor Cosmo Kramer or the malicious mailman Newman .