Fact of the Day: Big Ben 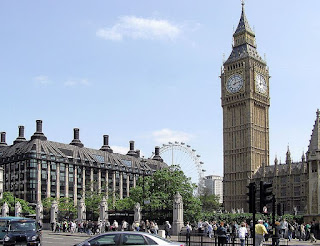 The famous clock tower known as Big Ben is just a nickname. It's official name is the Elizabeth Tower after Queen Elizabeth II though the name was changed in 2012 as it was just The Clock Tower beforehand. The Big Ben name is most likely named after Benjamin Hall, who was a Whig politician from the 19th century and a baron.
Posted by Adam at 12:00 AM

thank you for informative post.and happy birthday to your lovely wife ,may she see many more

I never knew that even though I've stood right underneath it.

One of my favorite places ever.

One of my goals in life is to see Big Ben!

Big Ben was all I knew it as

I think that Big Ben is the nickname of the large bell inside the tower, to be precise. But it gets applied to the tower as a whole by extension.

I would love to visit there some day, it looks amazing!

Interesting information.
To so many (including me) it is simply 'Big Ben'

I've actually seen it in person.

Stayed in a nearby hotel once and Big Ben is really loud.

I agree with you, Big Ben is actually the bell.

Look at this link for info.
http://toptravellists.com/big-ben-facts/

I agree wholeheartedly with Stephen - IT IS LOUD.
I think you can go on a tour of the Tower but your eardrums
may never be the same again if you are there when it "chimes".
I preferred to keep my eardrums intact so didn't check to see
if a tour was possible.
Colin