Fact of the Day: Camille Monet 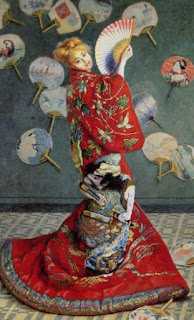 Camille Doncieux was the wife of artist Claude Monet, and she was often the subject of many of his artworks. She initially was his girlfriend that lived with him in his days of poverty and gave birth to his son Jean. They later married, but most of Monet's side of the family did not approve of the marriage and even Monet's father did not attend the wedding. She would pass away long before he did of pelvic cancer.
Posted by Adam at 4:17 AM

Sad when family can't at least pretend to approve

Love it! Thanks for sharing.

That's too bad about the family

Monet painted her on her deathbed and it's a remarkable depiction.

I never knew her story before. I suspect his family's disdain was a class thing?