Fact of the Day: Eugene Lazowski 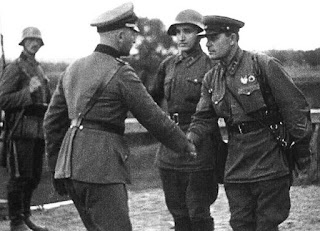 Poland was the first country to be invaded by Nazi Germany and Poland proved to be the worst country to be in for Jewish people during World War II. German forces forced them into ghettos and concentration camps with very few escaping. A doctor named Eugene Lazowski saved a few thousand Jewish people in Poland by creating a vaccine of dead typhus bacteria cells which would make a person appear to have typhus but not actually suffer from it. The local town (including the non-Jewish population) were given it and Germans were so afraid of typhus (as it was very contagious) that they quarantined the places and left everyone alone.
Posted by Adam at 12:00 AM

Email ThisBlogThis!Share to TwitterShare to FacebookShare to Pinterest
Labels: fact of the day, germany, Judaism, Poland

eugene was a hero, and a very humble man. it's a great story, i have seen several documentaries about it!!!

That was a smart move indeed

Wow, that is amazing. I didn't know this!

I've never heard this story before. A true hero!

An interesting piece of WWII history.

Smart move. Not too many people would have thought of this ploy
to remain safe.
Colin