Fact of the Day: Presidential Vacations 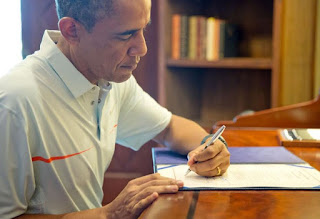 While President Barack Obama's two-terms are not yet over, by the time the next president takes office his number of vacation days is one of the lowest of any modern president. Currently he's still under 200 which is less than half of his predecessor George W. Bush. All other recent two-term presidents could hover anywhere from 150-500 but between 300-400 was common. But even though records are not reliable from the 18th and 19th century, the worst offenders seemed to be much earlier presidents. The worst of the bunch seemed to be John Adams and James Madison who literally took months off in a row. Though for modern presidents, there isn't much of a day-off as they still have to be on-call for anything important that comes up and much of the president's staff comes along for the trip.
Posted by Adam at 12:00 AM

And we know where President Obama has come for his vacations, don't we? I wonder if he'll still visit us.

This is definitely interesting!

I believe after his talks this week with the Australian
Prime Minister, Malcolm Turnbull, in both New York ( UN Session)
and in Washington that Australia is high on his agenda with his
wife, after he vacates the Oval Office for a holiday -seems he wants to have a Barrier Reef holiday and also bring his two daughters. He has visited here in an official capacity I think on a couple of occasions. Certainly twice I believe and loved us.
We don't tolerate all this hoopla with security from one neck of a visiting place to the other bloody neck.
Unlike that mongrel VP Dick Chenney of Bush Junior who had Sydney shut down for 4 hours so as his entourage could cross the Sydney Harbour Bridge. To make matters worse his cavalcade of cars returned
to the Intercontinental Hotel where he was "Holed Up" without him.
He came back on the official Navy Launch from his meeting with the then PM, John Howard. That was the icing on the cake for the Sydney stranded residents!!!!!!
I can tell you Chenney is still on the nose with the Sydney-siders
and is "persona non grata". Should he come again (most unlikely) he'll be hung by his scrawny balls from the Harbour Bridge.
Colin

This fact needs to be known by everyone in this country who criticize him when he takes a well deserved break.