Fact of the Day: Roosevelt Fala 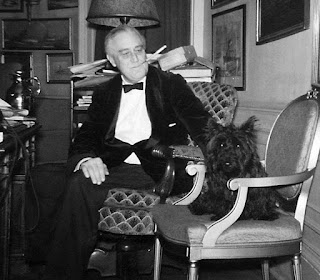 During part of his presidency, Franklin Delano Roosevelt had a Scottish terrier named Fala. One of the most popular pets of any president, Fala followed his master almost everywhere. When FDR died, a few noticed Fala having erratic behavior. Fala eventually bonded to the widowed Eleanor Roosevelt and died in 1952.
Posted by Adam at 12:00 AM

Email ThisBlogThis!Share to TwitterShare to FacebookShare to Pinterest
Labels: fact of the day, fdr

Dogs sure do bond and know

Scottish terriers sure are cute.

Cute dog. And so loyal.

I believe Fala has been included in the FDR memorial in D.C.

I'm glad Eleanor could comfort him.

There is a wonderful memorial to FDR in Washington, DC, and Fala is there with FDR.