Fact of the Day: Spanish Teide 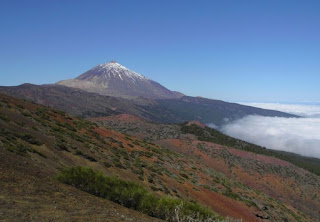 The tallest mountain in Spain known as Teide isn't really on the mainland but rather on the Canary Islands. The mountain was considered sacred to the aboriginal people that lived there. They believed that a evil-god named Guayota imprisoned Magec (god of sun and light) and plunged the world into darkness. That was until the Supreme God Achaman defeated Guayota and rescued Magec.
Posted by Adam at 12:00 AM

Fascinating. I wasn't familiar with that legend.
Hope you enjoyed your weekend to the max.

Wow, I had no idea about this, never heard about this legend!

Well that's three gods no one worship anymore, at least I think.

So many, many gods.

There sure are a lot of angry gods that people believed in.

A legend I was not aware of.

The Spanish Canary Islands are most interesting and unfortunately
in recent times has the distinction of having the worst major
air disaster (well on the tarmac) in history. KLM and Pan Am
747's smashing into each other. Seems to be an accident that
is impossible to believe could have happened.
Colin