Fact of the Day: Stalin Germany 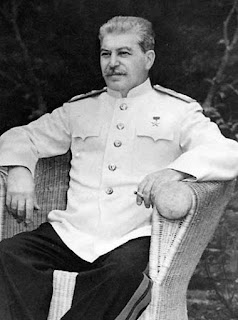 In 1952 Joseph Stalin proposed a reunited West Germany and East Germany in a neutral state with basic guarantees for freedom. Western nations were rather skeptical and were expecting a bluff so they turned him down. While it is true they had a chance of a unified Germany, many feared that in time that a whole Germany would be a puppet-state for the Soviet Union instead of just the eastern half.
Posted by Adam at 8:35 AM

I don't blame 'em! Russia and USA rule the UN!
Don't wanna be another country's bitch.

I didn't realize that Germany was split in two. Is it still this way or have they since been united?

I didn't know this

It was a valid concern for us.

Who knows what he really had in mind

They became one again in the late 1980s; that was what Reagan and the fall of the Berlin Wall was all about. :)

Not a fact I knew, either; thanks for sharing, Adam.

God almighty - what, if any history, are you aware of?

I believe the "ICH BIN EIN BERLINER" speech by JFK was the
spark that started the pressure on the East Germans and the Soviets to "think again" about treatment of citizens.
Then by 9th November 1989, with Mikhail Gorbachev, the Polish Solidarity situation of Gdansk, the Polish Pope
and others, the pressure on the East Germans was overbearing, so I wouldn't go so far to give all the plaudits to "Ronnie Reagan", but he certainly had an influence.
Colin