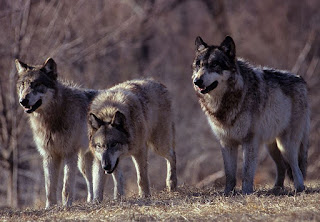 "The tiger and the lion may be more powerful, but the wolf does not perform in the circus."

While it's obvious this quote is rather modern as circuses have only existed for so long, I can't seem to find out who said this one if anybody knows at all. I've always had a great respect for wolves and admired many things about them. I've always considered them "better" in my mind than any branch of felines even though realistically one wolf could never beat a lion or a tiger one-on-one. Now honestly the quote is not really true, as wolves have been in circus acts before (though quite rare in modern-day America) but I certainly wouldn't want to be the one trying to get these guys to do tricks.
Posted by Adam at 12:00 PM

i never think of animals in this way but i'm sure it's true. the thought of these beautiful creatures being a part of a circus infuriates me, it is so unnatural and unnecessary. as an adult, i never went to a circus!!

Yes, I've read that quotation before but have never seen it attributed to anybody.

I guess if dogs can be trained to do tricks, so can wolves.

I think wolves are beautiful animals. Though I wouldn't want to meet up with a pack of them!

They are beautiful animals!