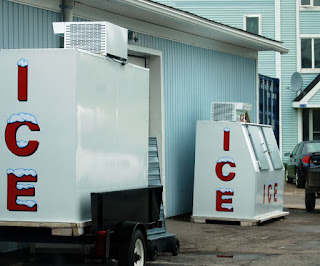 During my time where my job was at a super-market, I worked in the frozen food and dairy section. They were sort of two departments but they were like two side of a coin and you had to do both most of the time. Well every once in awhile the power would go out whether we liked it or not. There is some back-up power but it doesn't support much. So while the lights and registers work, almost everything else doesn't. Which means frozen and dairy cases will no longer keep food at its right temperatures. That's where the fun begins as we scramble to save the food until the power will return. 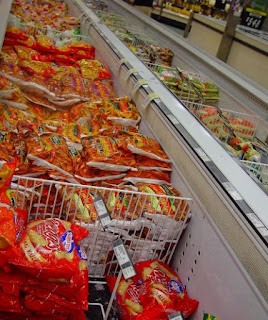 Which meant putting plastic over cases and keeping door shut. Anyone who works with the general public should know that some people are downright dumb, selfish, don't plain care, or all of the above. So they get mad when we tell them they can't get food out of the freezer because the cases don't need hot air even for a few seconds. The frozen manager Allan told a lady the honest truth and she kept her rage in rather politely...at first. You could see it in her face but she didn't say a thing in return. However her husband asked a few seconds later "what do we do now?" and she told him to "shut up" with some rage and a curse word. Poor guy, he got the anger that was most likely meant for us.
Posted by Adam at 12:00 PM

They could have gone to another store. People are kinda dumb.

I work on the ice rink))

Yeah, there's a psychological term for that kind of misdirected anger, but I can't remember what it is now and I'm too lazy to look it up on the internet.

They'd be much more upset if they got sick from spoiled food.

That does not sound like fun. Life it too short to get so angry.

Some people really don't have their priorities on straight.

Our world has become such a ME ME ME country that if it isn't something they want, they get pissed.

Wow! And I worry about my frozen goods if the power goes out. It would be really costly for a store! It's really sad how some people take their anger out on those who love them! I agree with bj above.