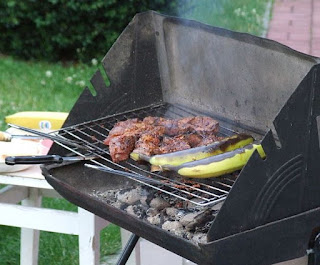 Being a vegetarian, I do not have a grill as it wouldn't get much use. But most houses in summer you can often see people grilling out hot dogs and hamburgers. At my mother's house, there was always two bad houses right down the block. The green one was always the worst, and I've seen some crazy things go on there. There was one family that lived there that was nothing but a sore to society. They had a little tiny grill and were cooking out in their front yard with it. 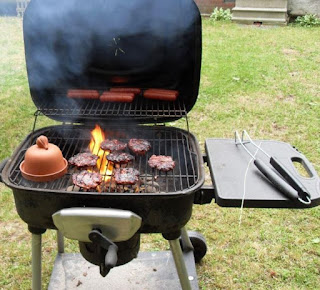 But those types of people often come out with their constant episodes of drama. Always fighting verbally for all the neighbors to see. I went to my mailbox one day and I saw the climax of some kind of argument. I saw the boyfriend of the couple say a few curse words where he lamented his situation and kicked the grill over with it being used. Smoke went everywhere but that was about it for the grill. They verbal war escalated not long after and I made sure the boys in the blue got down there ASAP. After they arrived and left, it was quiet as can be. I drove by for a few days and I always noticed the grill was never picked up for about a week.
Posted by Adam at 12:00 PM

Sad to have bad neighbors.

You can grill all sorts of veggies Adam, seriously give them a try! Just brush some olive oil, salt, pepper. zucchini would be really quick, and sweet peppers.

BBQing is great in the summer when it's hot because then you can cook outside and not heat up your house.

Yeah, I'm vegan and I love having a barbecue!

Christine is right, you can grill all kinds of veggies. They are so delicious.

Good grief! Scary neighbors!
We hardly ever use our grill except when there's a party.

I like the little terra cotta garlic roaster in the picture.