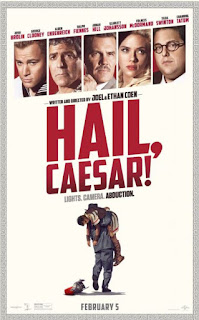 I don't remember exactly how I heard of Hail, Caesar! but I was interested in the movie. It seemed really nifty and unique. I'm also a big fan of Scarlett Johansson though I figured her role in the movie would be minor which its sort of is. The biggest characters are portrayed by Josh Brolin who I don't know as well as other actors, and George Clooney whom I don't like nearly as much as many women do. I also noticed Channing Tatum was in the film, and I don't really like him as an actor. So more or less while I was tempted to see it in theaters back in February of this year, I eventually passed on it. Now that I've had a chance to see it, is it any good. Critics seemed to have liked it a good bit but what about me? 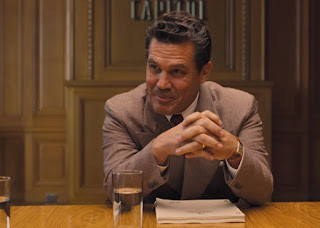 The central character of the story is Eddie Mannix who isn't a big Hollywood star but is vital in the success of Hollywood stars. He is a "fixer" which means when actors do stupid and bad things he's there to sweep scandals under the rug for the most part. He also is a bit of a public relations person often acting as a spokesperson to journalist questions, and seeking outside opinions about films. His bosses want to make a movie based on the life of Jesus Christ known as Hail, Caesar! and he asks a religious leader of all Christian sects and a Jewish rabbi about making sure the movie won't offend the average American regardless of what creed they follow. While Hail, Caesar! is suppose to be the biggest project of the year Eddie has to worry about more than just that. 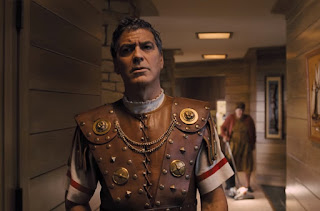 One of his actresses DeeAnna Moran is pregnant with an uncertain father and a very hopeless case of getting married. So Eddie comes up with a scheme to have her go on a vacation of sorts and have her return with an "adopted" child. He also is tasked with making an western star with very bad acting talents go into a very serious drama. However things go really bad for Eddie when Hail, Caesar!'s biggest star Baird Whitlock vanishes. Baird Whitlock wakes up after passing out and finds himself in a strange place. He essentially becomes a prisoner of a group of American communists who seek to exploit his studio. Then it becomes Eddie's job to save Baird Whitlock's life and career before things get really messed up. 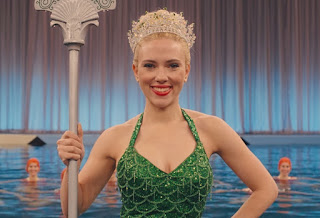 Overall I was a bit disappointed (but not terribly surprised) by Hail, Caesar! in the long-run. It's a good movie, but it has its flaws. My wife Daisy watched it with me and she had no clue what was going on for the first quarter of the movie. I really liked how the movie looked like a glamorous film from the 1950's but with the resolution of high-definition of the 21st century. But I didn't think the story picked up until towards the end and it was a bit of too little too late. Like many other movies with a notable ensemble cast, they were hoping you'd see the movie based on your affection for the stars and not so much anything else. The movie is good enough not to ruin any careers but I don't think anyone is getting an Oscar or even a Gloden Globe for this one.

Oh this film is unknown for me. But this not looks like my style of movies
xx

I've heard mixed things about this movie, I may have to check it out now.

The ads for this one just didn't capture my attention.

Oh, I really enjoyed this film!

never heard of this film before...might give it a watch!

My two favourite parts were Channing Tatum's suggestively gay dance number with all the sailors, and the outtakes of George Clooney's character goofily trying to look suitably reverential and awestruck when looking at Jesus.