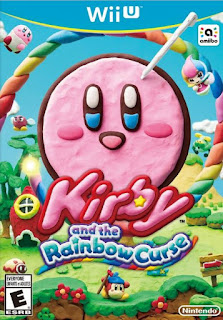 When the Nintendo DS came out in late 2004 it really needed a good game that wasn't just Super Mario 64 with extras. A few months into it, we got Kirby: Canvas Curse which not only gave the DS a much needed awesome game (the handheld console would later become much more popular) but innovated the Kirby series which had been rather stale at the time. The game used the stylus to draw lines as Kirby was now a ball that could no longer absorb powers from his enemies. Now over eleven years later, I finally got my hands on its sequel Kirby and the Rainbow Curse for WiiU. A decade does seem like a long wait for a true sequel and do find it a little odd they didn't put this one on 3DS instead. 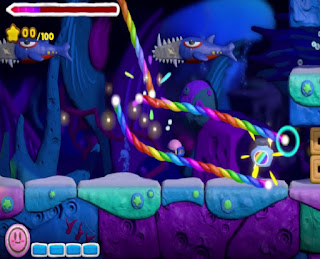 The game is very familiar to those who played Canvas Curse.  You draw lines (that are rainbow in color) which Kirby uses to travel across the world. With no real powers, you mainly have to worry about dashing to attack enemies otherwise (usually) the enemy will take part of your life bar. While the WiiU gamepad does not come with a stylus, just use your old DS or 3DS one. It's difficult to draw good lines with a tablet-style stylus or your fingers on the WiiU gamepad. If you didn't have a DS or 3DS, I'd beg you go find one or you probably wont be able to finish the game. I struggled on the first world until I found my old stylus from my 3DS. 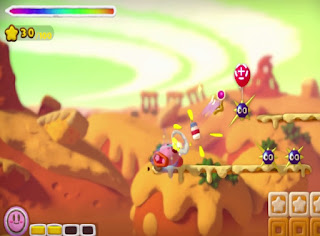 It's been over a decade since I played Canvas Curse, so it's hard to say what I remember and what I don't. Besides a new story and villain (King Dedede seems to be absent for once) it seems Kirby can transform into vehicles like I've seen in other games like Yoshi in Yoshi's Island. There's a tank, a rocket-ship, and submarine. They all vary rather differently and they aren't a true power-up. They basically become the only way to play a certain level and you simply transform back when you're done. There's also a super-power up you get when you collect 100 stars in the game. This can be used as normal Kirby or one his vehicle transformations. As regular Kirby it allows Kirby to get large and fly through the air destroying unbreakable objects, annihilating foes, and landing massive damage to a boss given you aim right during the few seconds. 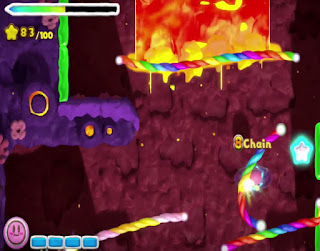 But overall Kirby and the Rainbow Curse I say is a bit worse than Canvas Curse. World One was a bore, but I really liked the later Worlds especially Red Volcano. The difficulty was also a bit random as some levels are a piece of cake, while some have moments that rival some of Mario's tougher levels during the NES and SNES days. I thought the boss battles were very fun, though I did hate to see at least two repeat battles as that's just not very creative. I also thought the final boss' true form's battle was terrible. And like all Kirby games, this one won't take you very long to finish. It took me about a week though I have far less time than I did back in 2005. But at least it wasn't like the GBA's Kirby: Nightmare in Dreamland which I finished in the same day I got it. This game also reminded me that I missed out on Kirby's Epic Yarn on the original Wii, so I hope I'll eventually get a chance to play it before the year is over.

I don't play any games.

OMG this game looks so cute!

Sorry, not a gamer.