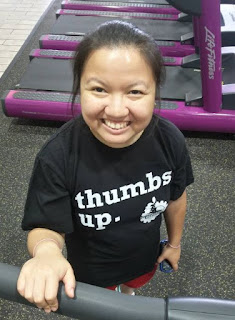 We've been quite busy this summer so we never had much chance to go to the gym. We had extremely briefly been with Gold's Gym until the local one was taken over by Planet Fitness. We officially became members there in August (even though we could always get in) and thus we were entitled to a t-shirt. Daisy loves new t-shirts so I let her have it.
Posted by Adam at 5:00 PM

Good call. I haven't been to the gym in ages.

I exercise at home.
My blog link: REFLECTIONS

I wish my gym gave out free t-shirts.

That was nice of you to let Daisy have the tee shirt ... it looks good.
Have fun whilst you keep fit at the gym

Cute shirt. And such a pretty smile!

Great happy photo!
I've never was in a gym, I prefer home fitness.

My husband got one upon joining as well, I believe. My gym charges like $20 for theirs. No thanks!

Cute lady in a cute t-shirt! I can't go to the gym in Victoria, so I'm walk, walk, walking!