Question: Which Hogwarts House Would You Be In? 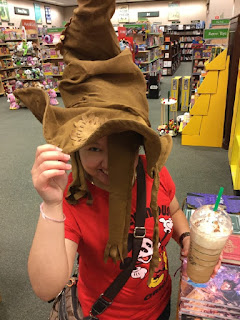 We found this Sorting Hat at Barnes and Noble and it reminded me of the Hogwarts Houses in Harry Potter. Many say they'd be in Gryffindor just because that's the main house in the story. High-intelligence is the main core of a Ravenclaw which I think I would have been sorted into if Hogwarts was real. Hufflepuff is considered the dumbest house by fans, but it's core value is loyalty, fairness and hard-work. I think Daisy would have been a Slytherin for similar reasons Horace Slughorn was one. Not a bad person (not all Slytherins were bad and not all dark wizards came from Slytherin) but a little obsessed with material things and naturally self-centered.

Which house do you think you'd fall into?
Posted by Adam at 6:45 PM

The fact that I would say "outhouse" probably indicates I know next to nothing about Harry Potter. It's probably good, but I'm an old fart.

The fact that I would say "outhouse" probably indicates I know next to nothing about Harry Potter. It's probably good, but I'm an old fart.

No matter what, points are always given to Gryffindor so they can alw3ays win every contest.

Pottermore housed me in Gryffindor, but really, I think I'm more of a Slytherin:) I loved Snape!

I actually took the official test on the website pottermore.com (you can only take the test once, so you have to answer as truthful as possible) and I got Ravenclaw! My husband got Gryffindor. :)

According to Pottermore, I'm a Slytherin and, frankly, I'm ok with this. Slytherin are hot headed and ambitious. I will take Gryffindor or Ravenclaw as close seconds though.

Ah I have no idea, but the hat is cool!

I just went and signed up at pottermore.com in order to be sorted officially. Gryffindor for me!

I honestly have no idea!