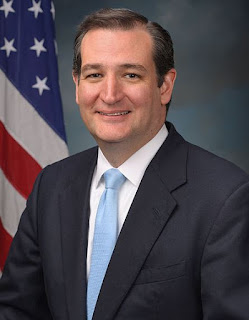 Many of you know that I'm not a fan of Ted Cruz, but I was a little surprised when he refused to endorse Trump and tried to take away his nomination at the convention with telling delegates to vote their "conscience". I don't really blame Ted Cruz for the move back then, Trump did insult both his wife and his dad with such poor taste. Who knew Ted Cruz even had a conscience? And one so very easily broken. But now Trump has his blessing because you can degrade this man's family as long as you're aren't a Democrat.
Posted by Adam at 11:00 AM

I think he only did it to improve his chances for future elections.
My blog link: REFLECTIONS

Well well, there is a road to Damascus in the land of the USA!!!
I can only imagine what a confused Lord above ( I think the USA has it's own Lord) thought when down on the Cruz knees 'the bible reader, little Teddy, asked for "Divine Inspirations".
I just wonder was Teddy boy on the road to Lubbock, TX, or the road to Crossville, Tenn or maybe on the long road to that illustrious University in Springfield, Missouri????

Here on the International news this morning, there was a VERY large gathering of young Americans gathered at the Brandenburg Gate (Berlin
for those without geography knowledge) urging all Americans based in work in Europe to register for voting and to vote and NOT for the new World Wall builder, ie Trump.

JFK and Ronald Reagan would have approved 100% plus at this display.

Yesterday whilst in the Brisbane CBD, there was a promotion in front of the City Town Hall for basketball. Half courts all marked out with the baskets - balls flying everywhere. I sat down and watched and next to me was a young American backpacker couple. I asked what they were going to do - reply: We have registered at the US Consulate to vote and it will be for Hillary. They furthermore informed me that they pretend in many occasions to be Canadians - that says it all!
Look out Canadian viewers you may be swamped from those below the border if and a big IF (I and the World hope) Armageddon befalls the once great USA!
Cruz has really shown what a hopeless, spineless creature he is.
Colin

I lost what little respect I had when he endorsed Trump.

Stephen - you surprise me. You ACTUALLY could find some "respect"
for bloody Cruz????????
I cannot understand how the Republican Party could not find a viable, sensible, knowledgeable candidate to stand for the Presidency!!!
Colin