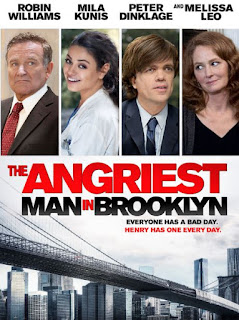 The Angriest Man in Brooklyn is something I've been meaning to see for quite some time. Mainly because I've been meaning to watch every Robin William's movie after his tragic death in 2014 which took place not long after the movie came out so it's one of his final films. It was based on a movie made a long time ago in Israel called The 92 Minutes of Mr. Baum which I obviously never heard of before. The movie did very poorly with critics and other people didn't seem too thrilled about it either. Which is a shame since it certainly has a strong cast with Robin Williams, Mila Kunis, and Peter Dinklage. But hey Robin Williams movies are like pizza, even the bad pizza is sort of good right? 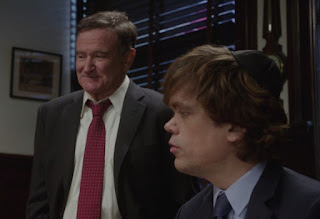 Robin Williams plays Henry Altmann who is one angry man. He was never such a bad guy until his son Peter died in an accident. Ever since then he's been filled with rage, often hurting those around him in some way. He's alienated his wife, annoyed his other son Tommy, and disappointed his brother Aaron. Henry works with Aaron but tells the office staff that he must take a trip to the doctor before work. His regular physician Dr. Fielding is absent, so Dr. Sharon Gill takes over for him. But the news isn't so good. Turns out Henry has a brain aneurism, and it's very serious. Being hateful and mean, Henry takes the news awfully bad. He screams at Dr. Sharon Gill and demands to know how much time is left of his life. She freaks out from the intimidation and for some random reason tells him ninety minutes. 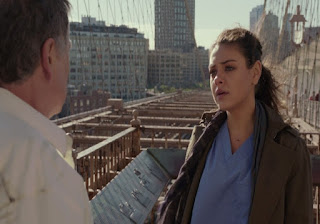 At first Henry thinks it's all a bunch of baloney, but could she be right? With less than two hours, Henry starts to think about his life and who's he's done wrong. He starts to get paranoid and rushes out to make amends. Though his angry nature doesn't make matter easy when it comes to being forgiven. Dr. Sharon Gill is incredibly guilty as she told him something that was wrong. Though she wasn't far from being right as his condition could make him drop dead by the time the sun sets. She knows his only chance is the hospital, so she rushes out to find out where he went. But he'll prove to be a difficult man to get a hold of when he's on his own quest to make peace on Earth before he's called up to another world. 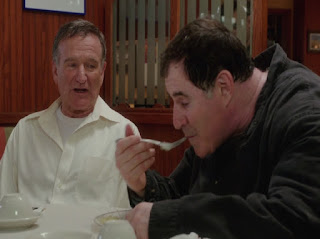 I'd say The Angriest Man in Brooklyn is a little better than I expected. Robin Williams had a lot of low-par films but he is by far the best thing about them. Peter Dinklage's role is minor and I just didn't really like Mila Kunis' character. The story has some originality but it seems almost like a sitcom plot for an episode not a major movie. So the script isn't the greatest and while Robin Williams can be super-funny (this time as a jerk) it's just not enough to sail this ship into the realm of excellent. I think it's a likable movie, but nothing special. It's a shame that Robin Williams really did struggle to get into really good movies in the last couple of years before he died.

I've never heard of this movie. Even though the plot does sound interesting enough, I probably won't see this, although I do agree that Robin's films are like pizza:) (I like that analogy.)

I've seen this one and your score is what I'd give it, too.

So crazy because I didn't hear of this movie! I'll have to check it out!

They didn't show this movie here in Sicily. They show only action movies or science fiction.

They didn't show this movie here in Sicily. They show only action movies or science fiction.

Never even heard of this movie.