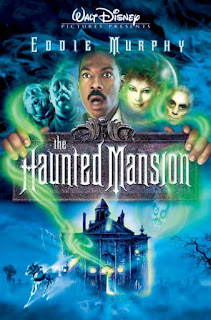 Back in the early 2000's Disney gained a bit of notability (and even more skepticism) for making two major movies based on theme park rides at their Disney parks. Pirates of the Caribbean with Johnny Depp was a huge success and is still getting sequels. The Haunted Mansion was rather...not a success. It didn't do bad at the box office but critics were not impressed. It also makes me wonder what happened to Eddie Murphy's career. Back in 2003 his name still meant a lot especially for movie comedies. But to be honest, how many recent movies have you seen with Eddie Murphy? Probably zero. I remember my brother Zach and my mother seeing this one back in 2003 but I didn't want to tag along and I think they liked it if I remember right. But now 13 years later, I finally got to see it for myself mainly because of my wife Daisy. 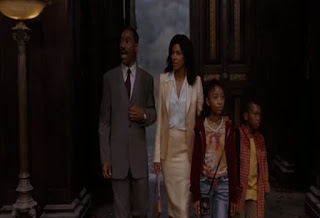 The story is about Jim Evers who is a workaholic real estate agent who spends very little time with his family. His wife Sara Evers is highly critical when he keeps missing family event after family event just because he found one more unneeded client. He vows to change his ways and tries to plan something big for her and their two children Michael and Megan. However old habits die hard, and he gets wind of a house that may be too big to just pass by. It's apparently on the way to the family's vacation destination so it's suppose to be a one hour diversion. However they are informed by the elderly butler Ramsley that the river has flooded and the roads are unsafe. While it seems like a good idea to stay in the mansion for the night, Jim is rather upset by the new events. 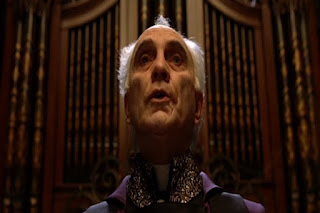 The butler introduces the master of the house, Edward Gracey who apparently inherited the large estate from his departed grandfather. Jim is rather puzzled on why he wanted to get rid of the place given the size and family history behind it. Edward retorts that there is a lot of painful memories in the walls of the home and there is much to be settled. It doesn't' take long for Jim and the rest of his family to realize this is no ordinary house. They encounter ghosts but soon realize they are far stronger than just visual beings stuck in another dimension. And even worse is other terrible creatures from the lands of the underworld. Will Jim being able to save his wife and kids before the house adds them to the land of the dead? 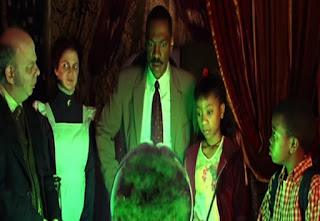 I can see why The Haunted Mansion was not a big success with critics. Like Dark Shadows, the movie tries to be funny and scary and comes up neither. Unlike the more popular movie set in the Caribbean, the story here is rather mediocre. You never fear for any of the characters and you pretty much figure how it will end. And it actually feels like an amusement park ride at times which would be good if it was only ten minutes long. But just like movies at the amusement park, they seem out of place and really dumb. Disney has hit highs and lows before and this one was just a big dumb idea on the creative level. Granted it's still fairly likable, but it's not going to be very memorable to anyone in ten years except maybe Eddie Murphy.

I saw this a long time ago. I'd give it about the same rating!

hahhaa...this was a really cute movie..enjoyed seeing it with grandkids...

It's been a long time since I've seen an Eddie Murphy movie.

I always enjoy your thorough movie reviews, Adam! I didn't see this one. Hope all is well.

This movie is nice :)