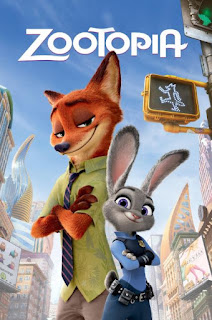 It was either this year or last when I first heard of Zootopia. I saw the trailer and I was impressed but not that convinced. While I trust almost anything Pixar, most animated films don't drive me out to the movie theater. So I waited on Zootopia and over the months I did hear very good things about the movie, and I noticed Ginnifer Goodwin  had the lead role as the bunny. I really like her as Snow White/Mary Margaret on Once Upon a Time, so I knew she'd do well as a voice-actress as well. Zootopia did well at the box office, and extremely well with critics as well. Sounds like it could get the Oscar for Best Animated Picture (most if not all animated movies are ignored when it comes to Best Picture) for the year of 2016, but is it really that good? 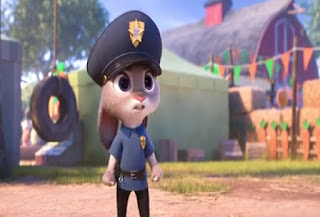 The hero of the story is Judy Hoops, a European rabbit in a fictional world with no humans. Instead animals take the places in sophisticated society. But all animals know they were once more primitive but one day prey and predator evolved to be friends (of sorts) instead of enemies. Bunnies usually only become carrot farmers, but Judy wants to be a police officer. She shows this at an early age, and her parents are less than thrilled. Bunnies are on the weak side of the spectrum and carrot farming is more safe for their daughter. Stronger than any animal out there is Judy's will-power, and she keeps her dream alive as she grows up. She finds a job in Zootopia and passes the police academy despite eveyrone thinking she would run back home to the carrot farm. No bunny has ever been a police officer, that's until she became one. 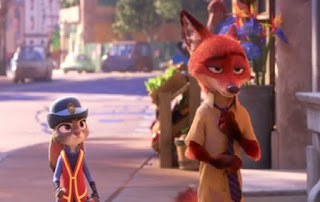 Judy gets special recognition from the mayor and is excited to start on the force. However the police chief Bogo doesn't take her seriously and makes her a meter-maid. She is depressed by the news, and ends up crossing paths with a fox named Nick Wilde. She thinks the best at first, but sees Nick's darker side. However the two form a partnership when Judy is tasked with finding a missing otter with a worried wife and children. However she only got the assignment by going above the police chief's head to the Deputy Mayor. Chief Bogo agrees but only if Judy accepts she must resign if she can't find the otter in forty-eight hours. But the mystery will be far grander than either Judy or Nick ever expected. 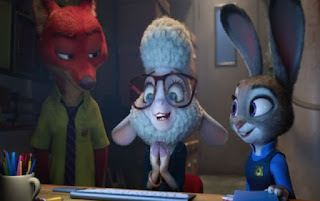 I knew I would like the movie Zootopia and I just loved the film from start to end. The plot may be simple enough but has a lot of rich details and many twists. I kind of guessed the secret-villain a little early but my wife didn't see it coming. There's also a lot of metaphors in the movie that kids might not get, but everyone else would about acceptance of other groups of people. So to be honest, you really don't want to miss Zootopia if you have the chance. It's one of 2016's best films and could easily rival Pixar's greatest works. My wife is already craving a sequel and I admit it's going to be really difficult for them out-do this one. So if one does come out (which I'm sure it will) I really hope it meets the very high bar that was raised by the first movie.

I absolutely loved Zootopia, it was such a cute movie! :)

I love this movie too! It has great messages about acceptance, tolerance, no bullying and reaching for your dreams.

Others have complimented this movie but I've yet to see it.

Thanks for the review
Score A is good ...