Fact of the Day: Cafeteria Catholics 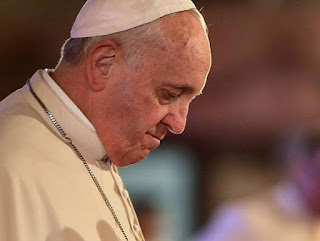 A Cafeteria Catholic is a term coined by other Catholics about members of the church who consider themselves Catholic but disagree on at least one (often much more) stances of the church on issues of "morality". Such as being pro-choice, pro-marriage equality, pro-birth control, and more. Even a big reformer like Pope Francis has said "They may call themselves Catholic, but they have one foot out the door.” on the matter.
Posted by Adam at 12:00 AM

Pffft is all I can say to any of that

Am Catholic and I guess I'm a Cafeteria Catholic then...I can live with that.

What's better? Choosing things at a cafeteria or having all sorts of crap rammed down your throat?

I LOVE your facts. I have never heard this saying before!

Interesting!!!
I think I would be like Emmylou MW, we are "supposedly" having a vote here on legalising "same sex" marriages. It has become quite a political hot cake.......70% of the population are in favour or like me "couldn't care less".
To have a referendum, the cost would be $200 million. I would prefer
a "Free Vote" by the politicans in Canberra - most are in favour or couldn't care less - the cost for this - NIL.
We voted them into their parliamentary positions of either major party or some of the lunatic fringe Senators, so let them decide.
A vote by the people could end up with vicious attacks by people of differing views and could turn nasty.
Colin