Fact of the Day: Francis and Elizabeth 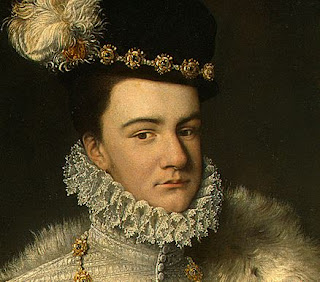 One of the most notable things about Elizabeth I of England was the fact that she never married and had children to be heirs to the throne. She did have suitors even towards the end of her life. One of them was Francis, Duke of Anjou who was 24 when she was 46. While they were many reasons why she shouldn't have married him, she was quite fond of him. Had they married, their child would have been King of both England and France (assuming Protestants in England or Catholics in France would not had stopped them) when they passed away as Francis belonged to the House of Valois which ended on the death of Francis' brother King Henry III.
Posted by Adam at 12:00 AM

She was too old for him. Way too old.

That is rather old that day in age

In Bizarro World, this could have happened! Mmmmmm

Elizabeth was a smart woman not to dilute or undermine her power by getting married. It was so rare for any woman to have power in those days, she made the most of it!