Fact of the Day: Giuliani Marriages 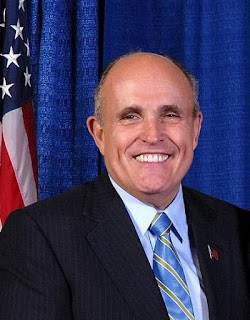 Becoming a recent vocal critic of the marriage between Bill and Hillary Clinton during the 2016 Presidential election, Giuliani himself was never the perfect husband. When he divorced his first wife, he had it religiously annulled by the Catholic Church saying he had no idea they were 2nd cousins. He met and dated his two future wives while he was still married causing controversy as the last one happened while he was still Mayor of New York City.
Posted by Adam at 12:00 AM

Yeah it's strange... But many people criticize others in things that are not perfect in their life too.

Giuliani is a sexy beast.

As the expression goes "people who live in glass houses shouldn't throw stones".

I so love it! Thanks for sharing.

Sounds like the pot calling the kettle black then.

I've always detested Giuliani, who more than anyone else has cashed in on the death and destruction of 9/11. And when it comes to criticizing Hillary for Bill's indiscretions, Rudy is an incredible hypocrite considering his own background.

This former LM of New York has really lost the plot.
This morning on the news here he was applauding the Buffoon
Trump for avoiding tax payments.
I loved the response of Bernie Sanders - "Well if we were all
like Trump as espoused by Mr.Giuliani, then we would not have a
country called the USA".
Pretty much on the ball and congratulations to Alec Baldwin and
"his debate as Trump" - hilarious and so frighteningly true.