Fact of the Day: Gorilla People 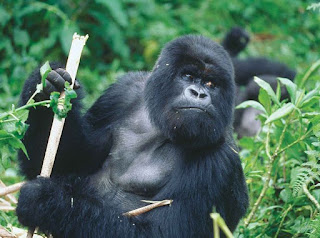 The English word gorilla is derived from an adventure of Hanno The Navigator who was a Carthaginian explorer. He explored the west African coast and apparently encountered what they described as an uncivilized but very hairy people. They were told by interpreters that these "people" were called Gorillae. Whether Hanno and his crew encountered humans, gorillas, or another type of primate is a debated subject.
Posted by Adam at 12:08 AM

Could have been very hairy humans or just gorillas

Hmm this is pretty interesting! Thanks for sharing!

Interesting, I have always been fascinated by gorillas.

This is a very interesting bit of info!

I just call it a monkey. haha
Lisa

Then there were the Fuzzy Wuzzies. Equally hairy.

Stephen!
In colonial Papua New Guinea the natives were referred to as "Fuzzie Wuzzies" and in WW2 many were stretcher bearers for Allied Soldiers and also assisted the Coast Watchers of the Australian forces for spotting Japanese Naval troop carriers.

In Brisbane in ANZAC Square to commemorate WW2 the statue is of a Papuan Native (Fuzzie Wuzzie) leading a badly mauled
soldier to an Aid Post. Each of the conflicts that Australia has taken part in have a dedicated statue to something in that conflict, from the Boer war up to Vietnam.
You could probably "google" Brisbane Anzac Square to see what it looks like.
Today the word "Fuzzie Wuzzie" is considered a word of derision and racism and is TABOO! Just like the word "nigger" in the USA.
The Canberra War Memorial likewise has a dedicated section to the Pacific Campaign depicting the valour and help of the "Fuzzie Wuzzie Angels".
The Papuan and New Guinean "Fuzzy Wuzzies" WERE NOT HAIRY.
Colin

Interesting detail, the part "uncivilized but very hairy people" made me smile. I think we have a lot in common with these creatures. Thank you for stopping by my blog!