Fact of the Day: Liberal Goldwater 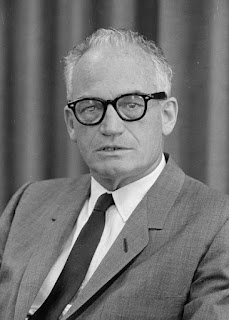 Arguably one of the most conservative presidential candidates of the 20th century, Barry Goldwater had a bit more liberal views in the 1990's which was long after he lost his bid to be president. He alienated many of his Republican supporters during the last years of his life. He endorsed a Democrat for a Arizona congressional election. He also told Republicans to not attack Bill Clinton over the Whitewater controversy. He also thought the U.S. military's policy of not allowing LGBT members to serve was wrong. And he grew very highly-critical of how the religious-right was taking over the Republican Party.
Posted by Adam at 12:00 AM

Email ThisBlogThis!Share to TwitterShare to FacebookShare to Pinterest
Labels: arizona, fact of the day, politics, republican

That's pretty amazing! I had no idea!

He was an interesting guy, with opinions you might not expect.

Tried to have common sense and got burned for it.

People do change their opinions sometimes.

He tried to work with both parties and this is the way it SHOULD be. When I was younger, it worked more like that...now Republicans and Democrats seem to hate ea others guts and fight and bicker and spread lies all over the place.

Interesting that someone would grow LESS conservative with age...

And a further second miracle seems to have occurred in Lubbock, Tx.
May the Lord be praised.
Colin

Interesting. I had no idea.