Fact of the Day: Presidents Against Trump 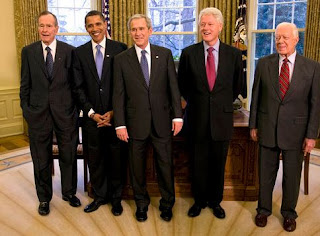 During every presidential election, each party's candidate is almost always endorsed by a former or current president of their own party. However in 2016 race, none of the living men who have been in the oval office have endorsed Republican nominee Donald Trump. The two Republicans George Bush Sr. and George Bush Jr. have refused to endorse Donald Trump.
Posted by Adam at 12:00 AM

The fact that the Bushes are not on board is a big deal.

I look at it this way: If someone is a 43 year old American, then there has not been a successful Republican Presidential ticket in their lifetime that has not had a Bush on it. The only times that the GOP has won since 1972 is when a Bush has been on the ticket.

And they're not supporting their party's candidate for President.

Can you blame them?

When even a moron like Bush won't back you, that says something.

This election is definitely interesting.

I'm not a fan of the Bushes but glad to know even they aren't stupid enough to endorse Trump.

I can't say I blame them.

They all understand that Trump is an atrocious candidate.

Because they are smart and know he's an idiot.

Thank God some sense prevails, but fear not sensible citizens of the USA.
The news here this morning on the latest Trump "articulated stupidity" is for you all to get out and vote on the 28th November.
Hillary must be laughing her head off......... no opponent for the second Tuesday of November which the whole World knows is election day every 4 years in the USA, except simpleton Donald!
The newsreaders here had a field day.
Cheers with great glee and mirth
Your Aussie correspondent on this Tom Foolery.
Colin

I could care less about the others but the two Bushes have really disappointed me. I am sick that they claim to be Republicans and will not support the Republican running.
I also am not here to fight so don't throw eggs at me, ya'll...

I wouldn't waste eggs, "bj".
The two Bushes can see the catastrophic consequences that this Looney Trump is advocating...........not one policy except a bloody Wall!
Colin (CFH)