Fact of the Day: Rex Reagan 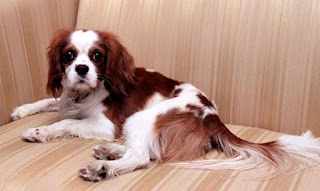 Rex was a Cavalier King Charles Spaniel dog that was owned by Ronald Reagan for part of his presidency. Rex was not a fan of the Lincoln Bedroom and would refuse to enter the room. Rex would also stand outside of it and bark. Leading many to think that he was seeing the ghost of Abraham Lincoln.
Posted by Adam at 12:00 AM

Or it could have just smelled bad in there

Perhaps he knew that Reagan would be target practice for someone someday and didn't fancy getting in the way.

He was a cute dog.

Oh, that is quite interesting!

They say animals can sense things that we can't. : )
Cute dog!