Fact of the Day: Sarah Hughes 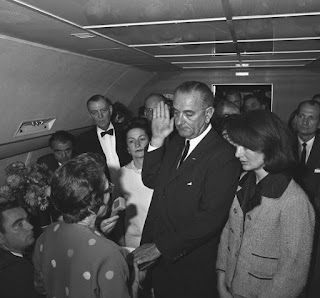 Sarah T. Hughes is the only woman to swear-in a U.S. president which she did for Lyndon Baines Johnson. She was a federal judge in Texas but did have the power to swear-in a president. The task is usually just for the Chief Justice of the Supreme Court but given that John F. Kennedy was just assassinated there was no time to wait.
Posted by Adam at 12:00 AM

Never knew that. Only one is rather sad.

Good news after an assassinated

good for her but sad there have been no others.....and very sad circumstances!!

Now this one I knew because I watched a documentary. Or rather I was in the living room when Ken was watching the documentary on it. lol

Did you know this was just a photo op designed by Johnson? He was already president the minute Kennedy died. no need constitutionally for a swear-in.

I never knew that - thanks for sharing this fact.

Sarah Hughes sure had her moment of glory and then disappeared ???
As Stephen writes, technically the moment JFK died, LBJ was President
but I think a "swearing in" is the formal act in the transition process.
Colin (CH/HC)